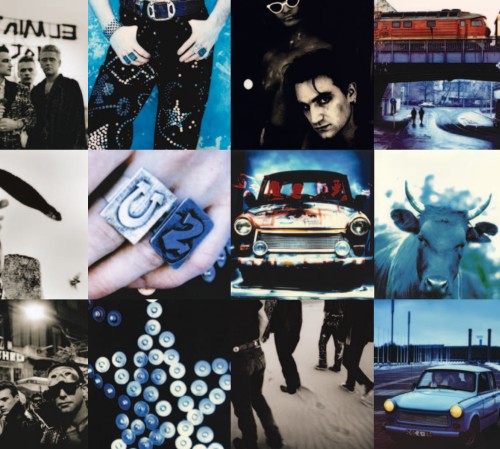 Deluxe two CD editon features the original album plus an additional 14 tracks including b-sides and remixes. Recorded at Hansa Studio in Berlin and Windmill Lane in Dublin, Achtung Baby was U2’s seventh studio album and went on to win the Grammy Award for Best Rock Performance, becoming one of the most significant records of the 1990s.

Reinventions rarely come as thorough and effective as Achtung Baby, an album that completely changed U2’s sound and style. The crashing, unrecognizable distorted guitars that open “Zoo Station” are a clear signal that U2 have traded their Americana pretensions for postmodern, contemporary European music. Drawing equally from Bowie’s electronic, avant-garde explorations of the late ’70s and the neo-psychedelic sounds of the thriving rave and Madchester club scenes of early-’90s England, Achtung Baby sounds vibrant and endlessly inventive. Unlike their inspirations, U2 rarely experiment with song structures over the course of the album. Instead, they use the thick dance beats, swirling guitars, layers of effects, and found sounds to break traditional songs out of their constraints, revealing the tortured emotional core of their songs with the hyper-loaded arrangements. In such a dense musical setting, it isn’t surprising that U2 have abandoned the political for the personal on Achtung Baby, since the music, even with its inviting rhythms, is more introspective than anthemic. Bono has never been as emotionally naked as he is on Achtung Baby, creating a feverish nightmare of broken hearts and desperate loneliness; unlike other U2 albums, it’s filled with sexual imagery, much of it quite disturbing, and it ends on a disquieting note. Few bands as far into their career as U2 have recorded an album as adventurous or fulfilled their ambitions quite as successfully as they do on Achtung Baby, and the result is arguably their best album.