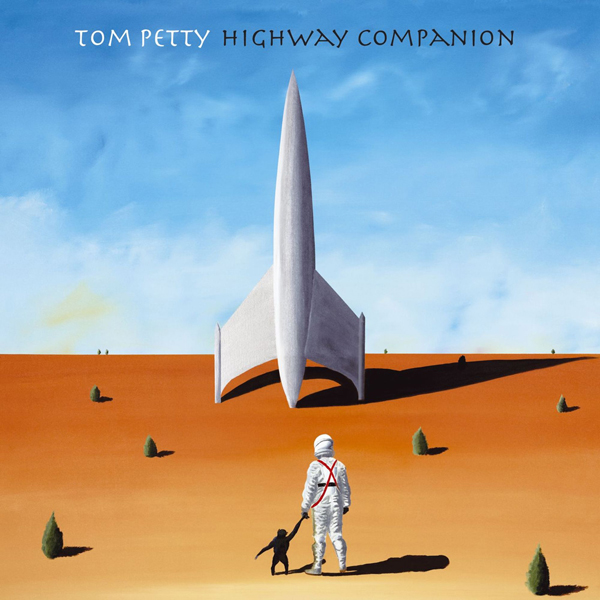 Highway Companion, Tom Petty’s third solo album, was recorded at Bungalow Palace and Shoreline Recorders in Los Angeles, CA. Jeff Lynne produced the album with Tom Petty and Mike Campbell. Both “Saving Grace” and “Big Weekend” were released to radio as singles. The record peaked at number 4 on the Billboard 200 chart and hit number one on the US Rock Albums chart in 2006.

Tom Petty’s concept for his third solo album is laid bare in its very title: it’s called Highway Companion, which is a tip-off that this record was made with the road in mind. As it kicks off with the chugging Jimmy Reed-via-ZZ Top riff on “Saving Grace,” the album does indeed seem to be ideal music for road trips, but Petty changes gears pretty quickly, down-shifting to the bittersweet acoustic “Square One.” Although the album ramps back up with the ’60s-styled pop of “Flirting with Time” and the swampy, Dylan-esque “Down South,” the quick move to the ruminative is a good indication that for as good as Highway Companion can sound on the road, Petty looks inward on this album just as frequently as he looks outward. Perhaps this is the best indication that this is indeed a solo affair, not a rock & roll record with the Heartbreakers. Petty of course doesn’t go it completely alone here: his longtime guitarist Mike Campbell is here as is producer/co-writer Jeff Lynne, who helmed Petty’s 1989 solo debut, Full Moon Fever, and the Heartbreakers’ 1991 Into the Great Wide Open and now returns to the fold 15 years later. Lynne’s previous Petty productions were so bright, big, and shiny, they would have been suitable for an ELO album, and given that track record, it would be easy to assume that he would follow the same template for Highway Companion, but that’s not the case at all. Highway Companion has as much in common with the rustic, handmade overtones of 1994’s Wildflowers as it does with the pop sheen of Full Moon Fever — it is precise and polished, yet it’s on a small scale, lacking the layers of overdubs that distinguish Lynne’s production, and the end result is quite appealing, since it’s at once modest but not insular. But Highway Companion also feels a little off, as if Petty is striving to make a fun rock & pop record — a soundtrack for the summer, or at least a good drive — but his heart is in making a melancholy introspective album, where he’s grappling with getting older. This gives the album a sad undercurrent even at its lightest moments, which makes it ideal for driving alone late at night. Since it arrives after the bombastic The Last DJ, it’s refreshing to hear Petty underplay his themes here, and it also helps that Lynne helps toughen up his songcraft. All this makes Highway Companion at the very least another typically reliable collection from Petty, but at its core, it’s moodier than most of his records. It has a lot in common with Petty’s divorce album, Echo, but it’s coming from a different place — one that’s content, yet still unsettled. That may mean that this album isn’t quite as fun as it initially seems on the surface, but that bittersweet undercurrent does indeed make Highway Companion a good partner for long nights on the road. —Stephen Thomas Erlewine