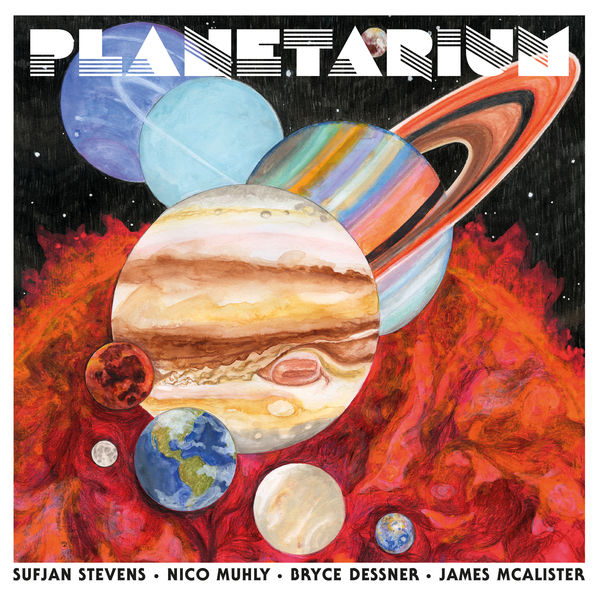 Planetarium is a concept album that occasionally gives way to ambient interludes and majestic brass chorales, buttressed by a percussive drive that keeps the momentum skyward. In spite of all the experimentation in sound and style, Sufjan’s vocals provide a clear and coherent center of gravity. The album includes some of his most diverse vocal performances to date (from soft hush to guttural scream), and whether he’s singing through effects pedals, vocoders, auto-tune or not, his voice delivers an ambitious flight map through the cosmos. Planetarium is an album co-composed by four musicians: Bryce Dessner, James McAlister, Nico Muhly, and Sufjan Stevens. Flanked by a string quartet and a consort of seven trombones, this unique collaborative ensemble has assembled an expansive song cycle that explores the Sun, the Moon, the planets and other celestial bodies of our solar system (and beyond) through soundscape, song, science and myth. The result of this creative alliance is a musical and aesthetic journey as far-reaching as its subject: from lush piano ballads to prog-rock political anthems, curious electronic back-beats to classical cadenzas, the vast musical styles seek to explore the diversity and mystery of our cosmos. The subject of the album is not just the wilderness of outer space, but the interior space of human consciousness and how it engages.