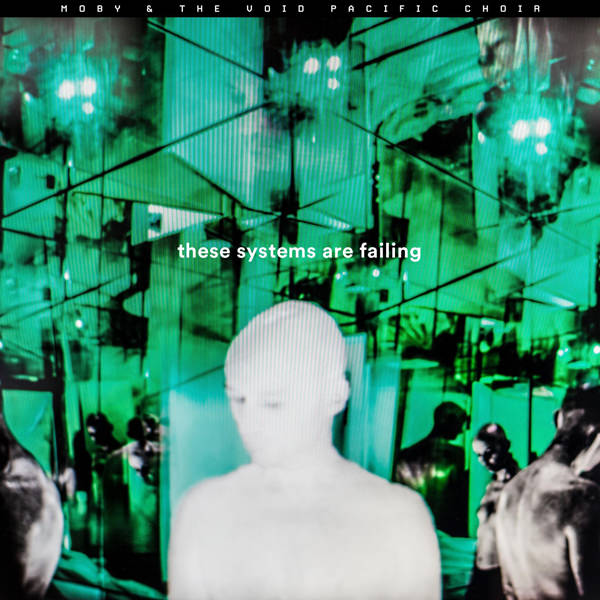 Pioneering electronic musician/DJ/producer Moby releases his 12th album These Systems Are Failing, as Moby & The Void Pacific Choir. As with much of Moby’s output during his nearly three-decadelong career, it’s not surprising that a spiritual & political questioning underpins the nine songs comprising latest full length album. In characteristically iconoclastic fashion, the weighty themes explored throughout These Systems Are Failing find expression in the most direct & personal music Moby has ever created. “That quality of atmospheric sadness I’ve done so much of before isn’t here – there’s nothing quiet or ambient,” he notes. “Sonically, this record isn’t subtle: it’s big & loud, with huge kick drums & massive choral choruses.”

Co-credited to the Void Pacific Choir — a name derived from a D.H. Lawrence quote — These Systems Are Failing is only slightly more collaborative than Moby’s solitary ambient work, and its effect is the opposite of that. Fully energized and tightly concentrated, the producer’s first studio album in three years is a concise and infrequently relenting set of nine songs that rail against those who have caused emotional and planetary harm. Moby revisits his punk and post-punk roots with a needling attack. Battering programmed drums, searing synthesizers, and torrents of rhythm guitar serve as prodding backdrops for his belting, often multi-tracked vocals. (The actual choir, a seven-member group including Moby, appears on two songs.) All the chanted choruses and seething verses over riotous rhythms evoke an apocalyptic glam-punk protest of sorts, with Moby indignant about “Selling off heaven for a perfect hell,” dejectedly reciting “Burn a courtyard, say it’s done/Throwing knives at a dying sun,” and referencing other ills in bleak terms. A couple shafts of light break through. The one that lasts longest is somewhere in “A Simple Love,” which projects a little hope before the despair resumes. In an accompanying essay, Moby says he views the album’s title as a phrase that prompts thought. Any deep thinking will likely have to occur once these brickbats are muted. –AllMusic Review by Andy Kellman