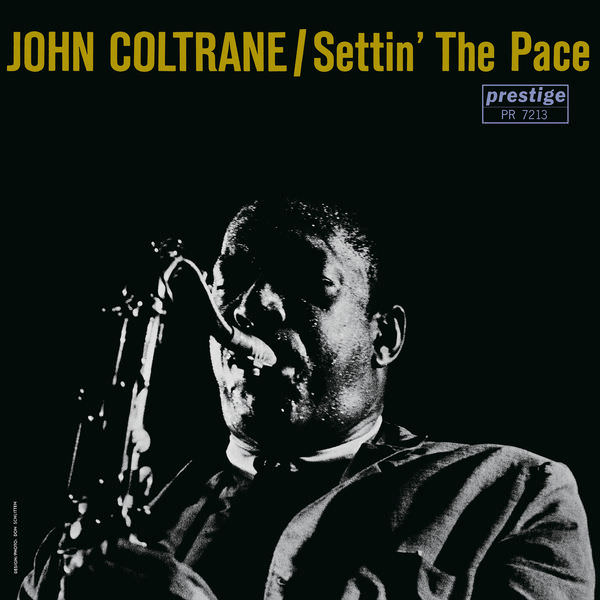 Coltrane does not do the old Dexter Gordon/Leo Parker duet number, “Settin’ the Pace,” in this set. The overall title merely refers to his preeminence in the jazz world at the time the recording was released in the early Sixties. Recorded in 1958, this session comes from a time when Trane had already played in the Miles Davis quintet and the Thelonious Monk quartet, and was frequenting Rudy Van Gelder’s New Jersey studio in recording situations backed by the Red Garland trio. This threesome–Garland, Paul Chambers, and Arthur Taylor–was a Prestige entity on its own, but had already released such albums with Coltrane as Traneing In and Soultrane. Settin’ the Pace, with its heady combination of seldom-done pop material and Jackie McLean’s intriguing “Little Melonae,” continued the excellent quartet series at a time when Trane was making jazz history at the head of yet another powerful foursome. with Red Garland, Paul Chambers, Arthur Taylor

This is John Coltrane from the period when he was a member of Miles Davis’ legendary 1950s quintet, accompanied by fellow quintet members Red Garland and Paul Chambers. This is Coltrane in a relaxed bop mode, making some swinging, relaxed jazz in the vein of Sonny Rollins and Stan Getz (the latter in his more boppish mode). This is not the fire-breathing saxophonist of the mid-’60s, but a player who was beginning to push against the boundaries, all the while playing with thoughtful, imaginative lyricism. It’s a set of little-known pop tunes of the era, with the exception of Jackie McLean’s “Little Melonae.” Anyone who likes the mainstream jazz of the ’50s, or Miles’ music of that time, or Coltrane fans who want to hear their idol in an easygoing context, should pick this up.