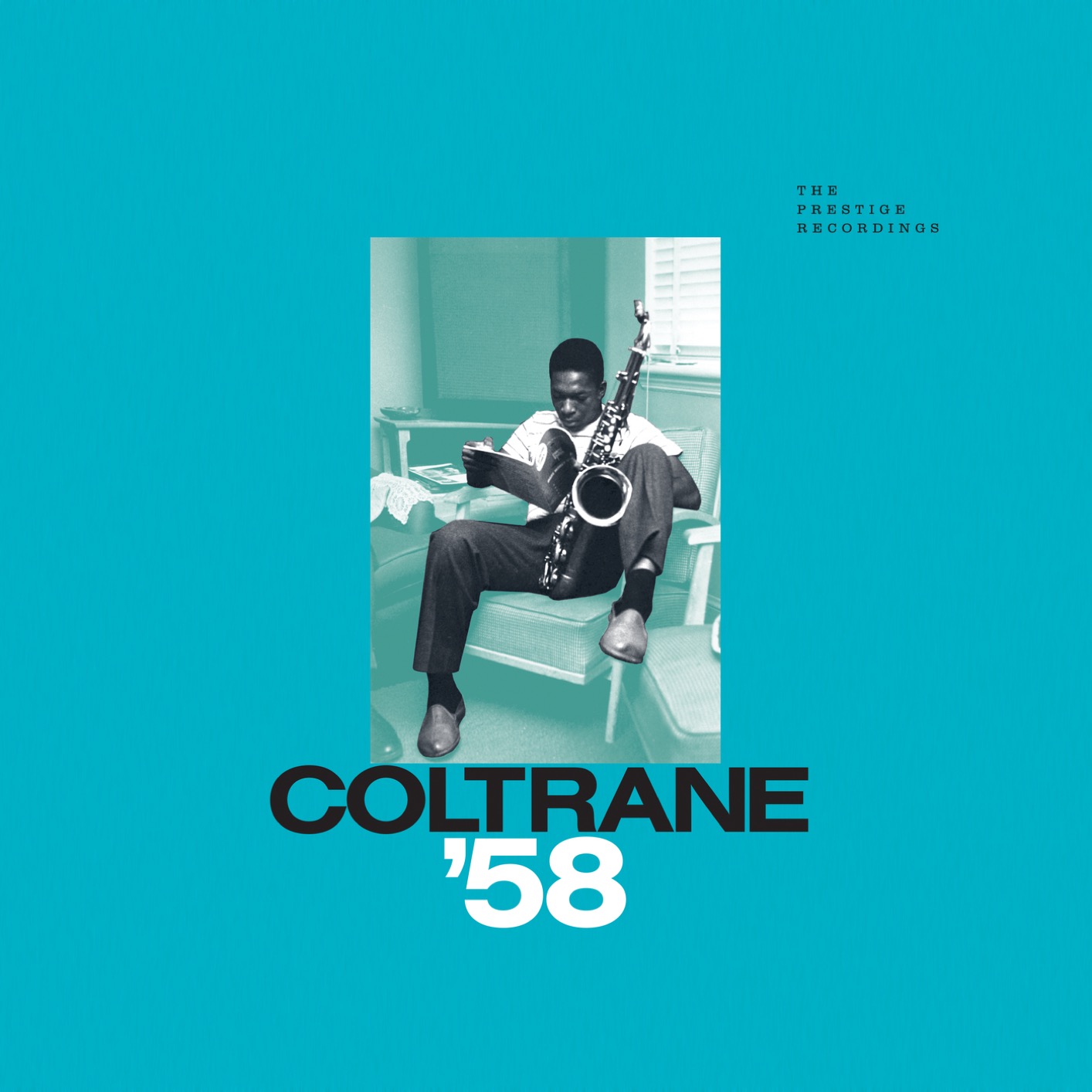 Newly remastered by Paul Blakemore featuring 37 tracks: Coltrane’s breakout year, when his mature sound first grabbed ears and his own recordings began to sell consistently, was 1958. This release chronicles the exciting story session by session, featuring all 37 tracks Coltrane recorded as a leader or co-leader for the independent Prestige Records label in those twelve months. This collection captures him in creative high gear—developing the signature improvisational style that journalist Ira Gitler famously dubbed “sheets of sound.”

The timely release marks the 70th year since the founding of Prestige and comes just after the 60th anniversary of these recordings.

Coltrane ’58 brims with the shared jazz repertoire of the day-blues, bebop standards and familiar ballads-as well as original compositions and obscure tunes Coltrane rediscovered. Together they offer an array of emotional depth and instrumental prowess, showing how the rising saxophonist was actively stretching sound and increasing the intensity, and shifting the direction of what jazz performance was about. Included are definitive versions of “Lush Life,” “Lover Come Back to Me,” “Stardust,” “Good Bait” and “Little Melonae”; first recordings of originals like “Nakatini Serenade,” “The Believer,” “Black Pearls” and the heartfelt “Theme for Ernie”; and extended tenor saxophone tours-de-force such as “Russian Lullaby,” “Sweet Sapphire Blues” and “I Want to Talk About You” that anticipate the stratospheric heights Coltrane would reach in the 1960s.

In 1958 Coltrane was still two years away from emerging as a bandleader, but his membership in ensembles led by Miles Davis and Thelonious Monk had propelled him into the spotlight as one of jazz’s most exciting and controversial figures. Coltrane ’58 serves as a window onto the shock and awe-and eventually deep appreciation-Coltrane generated during this period, when his sheets of sound approach pushed the bebop ideal of slaloming through a tune’s chordal pathways to its extreme.

To be sure, Coltrane ’58 is more than sheets of sound: It’s the sound of Coltrane working and smoothing out those sheets and exploring other ideas as well. For example, he frequently played in double-time—as if the chords were moving twice as fast as the rest of the band—and, if the music called for it, he’d decrease the intensity, caressing and embellishing a melody, an aspect that could calm the toughest critics.

Produced by Nick Phillips, the vinyl box includes eight 180-gram LPs, remastered from the original analog tapes by Paul Blakemore (all of which were recorded by renowned engineer Rudy Van Gelder) and cut by Clint Holley from 24-bit/192kHz transfers. The lavish, linen-wrapped, portfolio-style book features an eye-catching design and includes 40 pages containing extensive liner notes by Grammy®-winning American music historian Ashley Kahn, rare ephemera and historical photographs of the saxophonist and his collaborators, including several taken by renowned jazz photographers Francis Wolff and Esmond Edwards. The 5-CD edition, containing a 76-page book, is a faithful replica of the 8-LP vinyl box.

Coltrane ’58 reveals other significant aspects of Coltrane’s emergence, too, like his growing status in the hard bop brotherhood of the day. He recorded with contemporaries (many future legends in their own right), including pianist Red Garland; guitarist Kenny Burrell; trumpeters Donald Byrd, Freddie Hubbard and Wilbur Harden; bassist Paul Chambers and drummers Art Taylor, Jimmy Cobb and Louis Hayes. The sessions all took place in Rudy Van Gelder’s legendary home studio in Hackensack, New Jersey, where so much of the best jazz of that era was recorded. Coltrane’s music of 1958 benefits from a marked blue-collar, pressure-cooker aesthetic: Born in three-hour sessions with minimal rehearsal, head arrangements and mostly first takes, these tracks provide a true and transparent view of the talent Coltrane was able to draw upon and the timeless, improvised magic they created together.

It’s a challenge today to imagine how radical Coltrane must have sounded sixty years ago to jazz listeners accustomed to a gentler, lyrical flow. In his liner notes, Ashley Kahn sees an enduring relevancy in Coltrane’s bold chance-taking, as a creative artist and an African-American: “In the context of current headlines and an overriding sense of déjà vu, Coltrane’s music rings clearer than ever, with even greater meaning than it had in 1958. What he was playing then never felt less than urgent and relevant—subversive even. It still sounds that way.”

Remarkably, the majority of this music wasn’t released until the ’60s on various albums after Coltrane’s emergence as a bandleader, denying these 37 tracks the chance to tell their own collective story. By sequencing this music in the order of its original creation, Coltrane ’58 clearly delineates Coltrane’s first full year as a recording artist, finally allowing fans to experience—track by track—the emergence of a master improviser in his first great career crest.