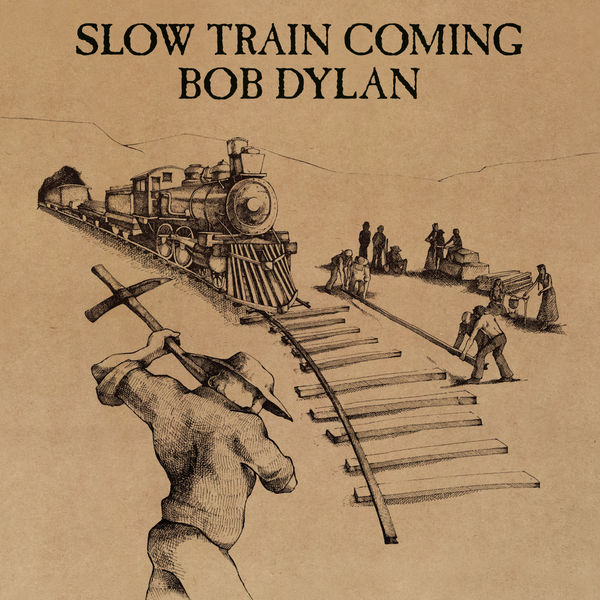 “Slow Train Coming” is the nineteenth studio album by American singer-songwriter Bob Dylan, released on August 20, 1979 by Columbia Records. It was Dylan’s first effort since converting to Christianity, and all of the songs either express his strong personal faith, or stress the importance of Christian teachings and philosophy. The evangelical nature of the record alienated many of Dylan’s existing fans; at the same time, many Christians were drawn into his fan base. “Slow Train Coming” was listed at #16 in the 2001 book CCM Presents: The 100 Greatest Albums in Christian Music.

Perhaps it was inevitable that Bob Dylan would change direction at the end of the ’70s, since he had dabbled in everything from full-on repudiation of his legacy to a quiet embrace of it, to dipping his toe into pure showmanship. Nobody really could have expected that he would turn to Christianity on Slow Train Coming, embracing a born-again philosophy with enthusiasm. He has no problem in believing in a vengeful god – you gotta serve somebody, after all – and this is pure brimstone and fire throughout the record, even on such lovely testimonials as “I Believe in You.” The unexpected side effect of his conversion is that it gave Dylan a focus he hadn’t had since Blood on the Tracks, and his concentration carries over to the music, which is lean and direct in a way that he hadn’t been since, well, Blood on the Tracks. Focus isn’t necessarily the same thing as consistency, and this does suffer from being a bit too dogmatic, not just in its religion, but in its musical approach. Still, it’s hard to deny Dylan’s revitalized sound here, and the result is a modest success that at least works on its own terms.