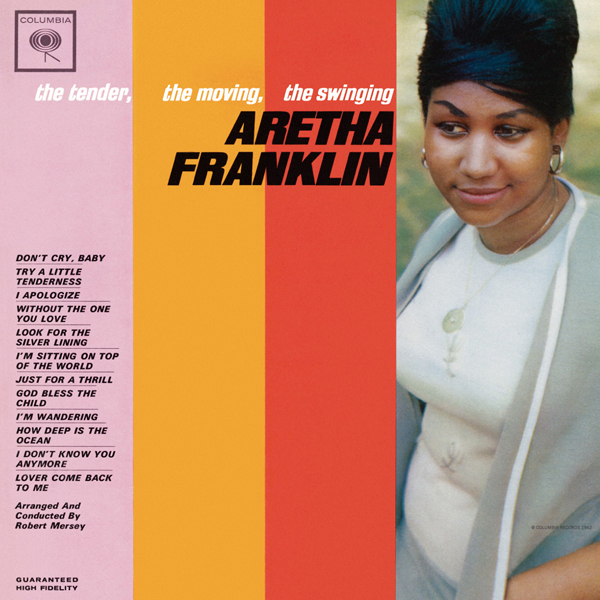 The Tender, the Moving, the Swinging Aretha Franklin is the fourth studio album by American singer Aretha Franklin, Released on August 13, 1962 by Columbia Records. It was her first album to achieve any commercial success, reaching #69 on the Billboard pop album charts. Unlike its predecessor, however, it did not have a hit single.

Aretha Franklin has simply been one of the greatest singers of the modern generation, and whether bringing her powerful, passionate voice to bear on gospel standards, songs from the Great American Songbook, jazz standards, pop ditties, or deep Southern soul and R&B, she has always had the presence — much like Ray Charles — to make anything she touches unmistakably hers. Franklin began her career in gospel when she was still a teenager, and her amazing vocal talents, coupled with her fine piano playing, marked her as a once-in-a-lifetime kind of artist, qualities very apparent to legendary talent scout John Hammond, who signed her to Columbia Records. The problem Hammond and Columbia immediately ran into, though, was how to best present that spirited voice to the secular pop world. Between 1960 and 1969 (her first release for the label was actually in 1961), Columbia tried Franklin in a variety of styles and settings, and if none of them exactly caught fire the way her legendary later sides for Atlantic Records would, they still allowed Franklin to explore a lot of avenues, and she was too good a singer not to be at least memorable in all of them. This wonderful box set includes CDs of Franklin’s seven full-length albums for the label, two CDs of her work with producers Bobby Scott (in 1963) and Clyde Otis (in 1964), a CD of singles produced by Bob Johnston, plus rarities that were sweetened and released after Franklin left Columbia for Atlantic and a DVD featuring Franklin performing several songs at the piano on The Steve Allen Show in 1964. It’s a tremendous set, and it portrays an artist working her own way toward how to best present herself to the world. We all know she got there. —AllMusic Review by Steve Leggett (Take a Look: Aretha Franklin Complete on Columbia)