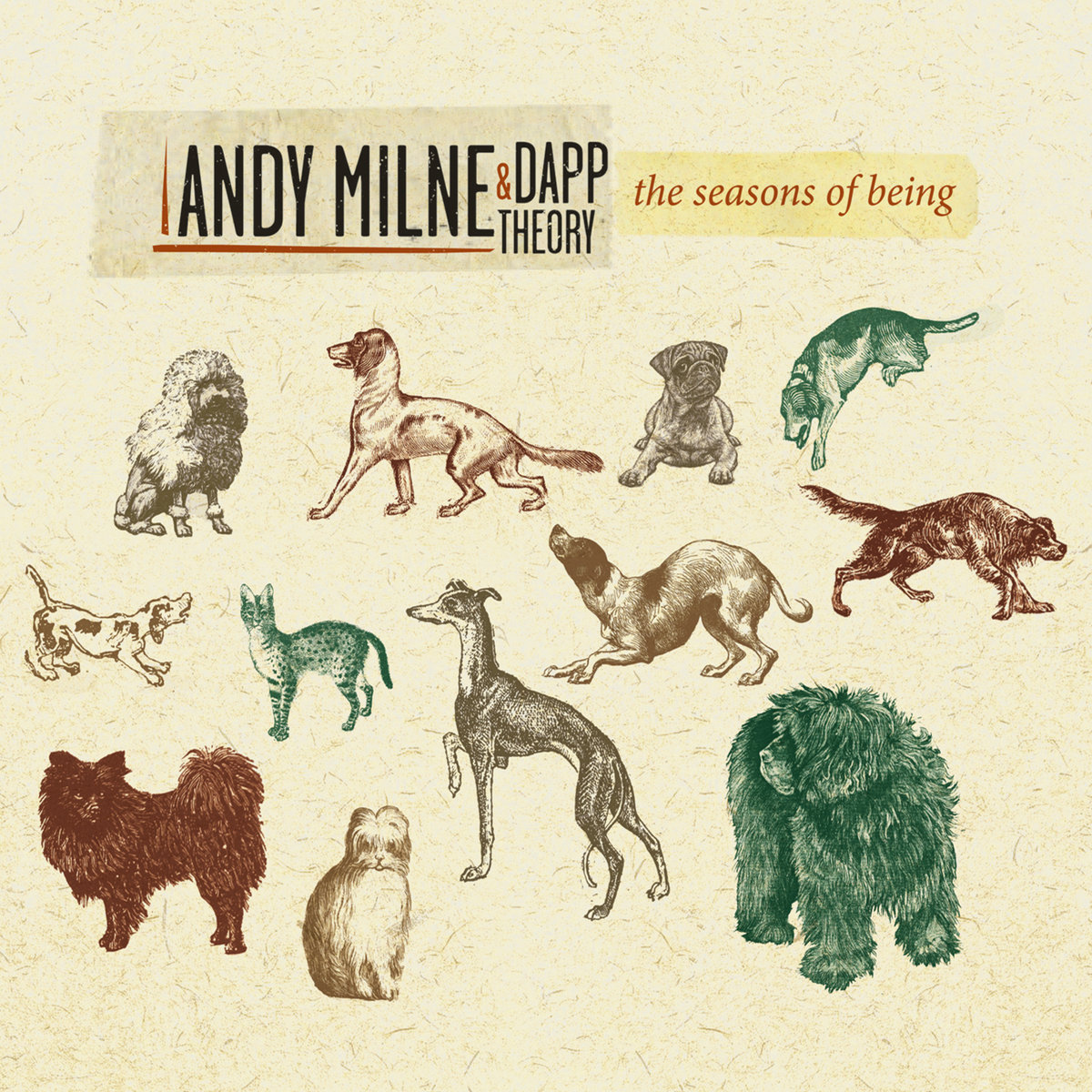 An oft-repeated piece of musical lore states that the great composer/arranger Duke Ellington wrote music specifically for the individuals in his orchestra. His knowledge of their musical lineage, strengths and weaknesses allowed him to customize parts for each voice. Pianist and composer Andy Milne takes this principle a step further on his new recording, The Seasons of Being. Applying the principles of homeopathic diagnosis, Milne generates an optimized environment for improvisation for his long running Dapp Theory ensemble and a host of special guests.

After a challenging couple of years and some seismic life changes, Milne was able to channel his energy into some positive changes, including accepting a full-time teaching position at the University of Michigan. But it was his own battle with prostate cancer that led the pianist to explore homeopathic healing, as he felt it was important in his quest to become cancer free. His study of the subject led to a Chamber Music America commission to explore the effects of homeopathic techniques on composition for a chamber ensemble.

Milne’s idea stemmed from his experiences performing other composers’ music, and from observing other musicians perform his. In some cases, inspiration would come easily, whether because of the material or the musician’s temperament. Milne wondered if there could be a way to personalize the music to optimize engagement and benefits for all involved during performance.

Naturally, Milne turned to his primary musical outlet, his collaborative ensemble Dapp Theory, which the pianist has led for twenty years. The cohesion amassed from time invested can be heard in the group’s interplay and singular response to color, texture and mood. The latest iteration of the group includes woodwind specialist Aaron Kruziki, bassist Christopher Tordini, drummer Kenny Grohowski and wordsmith John Moon.

To augment Dapp Theory’s already expansive sound, Milne wanted to recruit a number of diverse and experienced special guests to be a part of his experiment, the unifying element being that they were all musicians he respected and wanted to work with further. He entrusted the duties to guitarist Ben Monder, trumpeter Ralph Alessi, vocalist La Tanya Hall, saxophonist Michael Attias and cellists Christopher Hoffman and Jody Redhage.

Milne’s positive experiences with homeopathy led him to ask how it could influence improvisation and lead to more emotionally meaningful interactions for the musicians playing his music. He hoped to find a way to create compositions that play to hidden aspects of his collaborator’s emotional profiles, namely, where they might feel most stimulated to broaden their range of expression.

To apply his method, Milne studied each musician to collect and learn their emotional responses. Many of these responses would never have been garnered through their personal or musical relationships. First, Milne subjected the individuals to a listening test of 15 short excerpts of a wide array of musical styles, asking them to share how the music did or didn’t resonate for them. Second, there was a questionnaire with a number of yes/no questions. With the assistance of homeopathic healer David Kramer, Milne then assessed their handwritten responses, looking for clues to their musical tastes and emotional lineage. Kramer identified individual pathologies based on their answers. Milne found it remarkable how close those characterizations were to the individuals’ traits. In some cases Kramer was able to describe physical attributes of certain musicians.

Kramer’s diagnoses were meant to provide remedies or paths toward healing. Milne took these diagnoses and utilized their outcomes to compose pieces that would hopefully prompt positive responses from the musicians he chose to feature. Many times, the musicians did not know why they were reacting the way they were, so it was quite revelatory after they found out why they liked the way they felt while playing the pieces. So, much like Ellington, Milne was able to write to each musician’s personality rather than, their instrument, and on a far more clinical basis.

The program begins with “Surge & Splendor,” an overture of sorts that introduces the ensemble. It is a highly structured piece that highlights Monder’s guitar and includes narration from La Tanya Hall and John Moon. “The Cusp” is an introspective piece with a wide breadth of dynamics suited for Alessi’s assertive trumpet, while Hall’s vocals and Kruziki’s soprano sax are showcased on “The Guardian,” a ballad that reveals its beauty like a pearl in an oyster. The insistent “Scotopia” concerns itself with the interaction between the parts, with Moon engaging with trumpet, guitar and the rest of the ensemble. “Satanama” is a tranquil meditation for drums featuring Grohowski in what his pathology determined would be his sweet spot.

“Three-Way Mirror” is an episodic piece featuring three musicians with the same pathological profile, beginning with Attias and Moon pitted against each other, until Hoffman’s patience allows for his feature, the anticipation sweetening the conclusion. The lovely “Ancestree” features Tordini’s resonant bass playing on a piece of organized shifting metric patterns, the playing requiring discipline from the soloist. The brief and moving “Luminescence” utilizes the wide variety of harmonic colors this ensemble provides, and a haunting cadenza by Attias. The ensemble plays the melody of “Capturing the Castle” en masse, providing the sensation of complete security.

Andy Milne and Dapp Theory created a remarkable recording with the intention to heal on The Seasons of Being. The pianist came up with a novel approach to composing and group awareness that should be a sounding board for healthy, democratic approaches to collective activities for years to come.