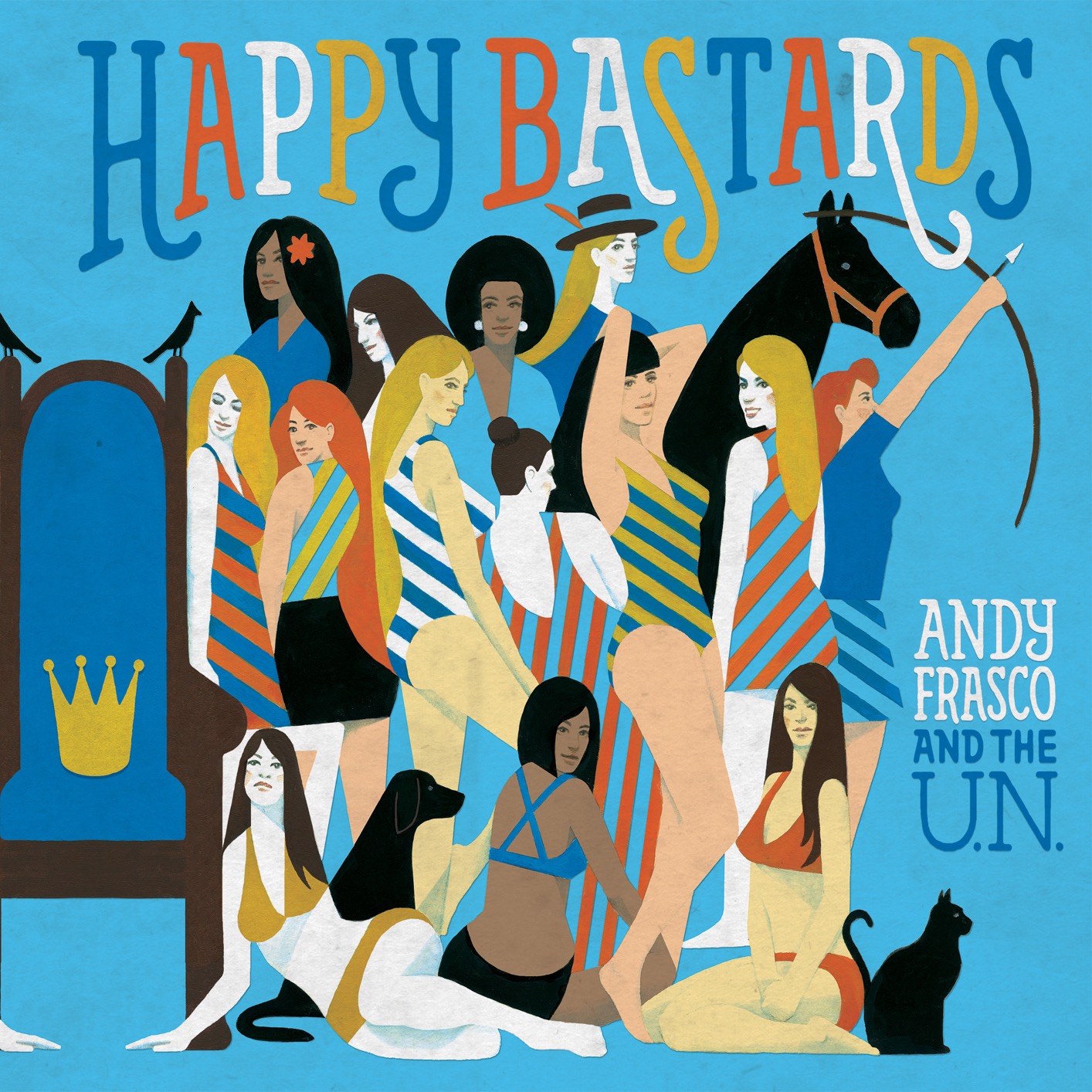 You can’t miss Andy Frasco. The electric-shock hair. The megawatt charisma. The golden lungs, magic fingers and party-starting songs. When this twenty-something Californian bandleader takes to the stage with The U.N., you’ll get an adrenalin-shot of pure escapism. “We want people to be happy,” explains Andy of his musical mission statement. “To smile at their faults, love life for what it is, and follow the beat of your own drum.”

Happy Bastards is aptly titled. Released on Ruf Records in 2016, this fourth full-length album shakes your feet and skewers your woes. Recorded at Lavish Studios and Brando’s Paradise, California, these twelve new songs are an industrial-strength blast of glass-half-full optimism, with the band’s self-styled brand of party blues jostling with funk, soul, rock and roots.

“I’m trying to bring a different interpretation of what people think the blues is,” says Andy. “Not all blues need to be sad and lonesome. I love acts like Wilson Pickett, Marvin Gaye, Buddy Guy, The Band, Samantha Fish, Houndmouth – all these acts that really made the blues their own style.”

Andy Frasco & The U.N. are surely destined to join that pantheon of greats. The band was formed in 2007, yet the frontman’s own backstory goes back further still, to his roots as a precocious 16-year-old manager/promoter on the West Coast. “I was sneaking into rock clubs trying to sign the hip new LA bands,” he remembers, “making business calls at lunchtime in my Math teacher’s classroom, just so they would believe I was older than 16.

“I was living two lives,” he adds. “But it brought me the foundation to eventually book myself for the first five years of my career when nobody really gave a shit about me. I knew I needed to earn their respect, so I told myself I’m not going to stop until I see my dreams come true. I’ve been on the road for ten years straight, playing over 250 shows a year, through six countries, basically living in a van. It’s a toss and pull relationship, and I wanted to try and give commentary on those subjects on Happy Bastards.”

Across the US and Europe, on major stages from Wakarusa to Zwarte Cross Festival, Andy earned a reputation for full-throttle, sweat-drenched, smash-and-grab live shows. “We’re just trying to throw a party,” he explains. “Get people to turn off their phones, leave their stress and complications at the door, live in the moment and just celebrate life for a few hours. If by the end of the night I see 90 per cent of the room laughing and smiling, then I know I did my job.”

There have been great studio albums before – try 2014’s acclaimed third release Half A Man – but none have bottled the band’s frantic live energy quite like Happy Bastards. “We got the record produced by Rick Parker (Lord Huron, Black Rebel Motorcycle Club, Scott Weiland Band) and John Avila from Oingo Boingo,” says Andy. “Having those guys on your side was huge. They get that we are a live band, so they set all of us up live and we basically all played together until we all got it right. It was an amazing thing to make a record like how they made records in the ’70s.”

Co-written by the frontman, guitarist Shawn Eckels and Kenli Mattus, these all-original songs are emotionally resonant and rip-it-up exciting, driven by the chemistry between the core U.N. lineup of Ernie Chang (sax), Andee Avila (drums) and Supaman (bass). “I basically picked my favourite musicians from around the world,” explains Andy of the cosmopolitan vibe. “I have a few guys from the Netherlands, Germany and guys from Missouri, Tennessee, Texas, California. That’s my favourite thing about music. It’s so universal. It doesn’t matter where you’re from or what language you speak.”

By extension, these songs are universal, too, with everyday worries fuelling everyman anthems. As Andy nears his thirties, the lyrics tell of a man accepting his mileage but poking maturity in the eye, with irresistible results. “The lyrics are really about being in a quarter-life crisis,” he explains. “Trying to adapt to being an adult without losing that kid in your spirit or soul.”

As such, there’s the reckless excess and reggae breakdown of stompy highlight “Mature As Fuck”. There’s the funk-bass mob chant of “You’re The Kind Of Crazy I Like”. Both ends of the romantic process are documented by the soul-drenched breakup tune “Good Ride”, and the acoustic-led alternative seduction ballad, “Let’s Get Down To Business” (“You know you make me want to climb the walls/You know you make me lose my shit…”).
The modern world might be a cruel and uncaring place, but while Happy Bastards plays, everything seems momentarily brighter, better, drunker and more up for a dance. “I think it’s my strongest piece of work to date,” considers Andy. “I wanted to make an album that celebrates life. And I think we accomplished that…”