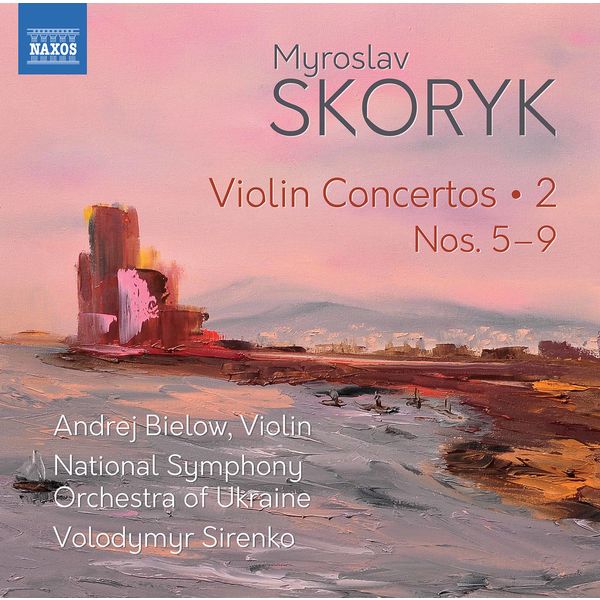 Myroslav Skoryk is one of Ukraine’s leading composers and teachers, with a portfolio of works that include opera, a symphonic transcription of Paganini’s Caprices, and a cycle of nine violin concertos written over a 45-year span. Concerto No. 5 utilises jazz elements and a vivid fugato, while Concerto No. 6 explores the use of sensual moods and provocative dance rhythms. Syncopation and lyricism suffuse Concerto No. 7, while No. 9 is both touching and dramatic. Concerto No. 8 offers a representation of events in Chopin’s life through quotations, in combination with Skoryk’s own distinctive musical voice.

“A pupil of Dmitry Kabalevsky, Myroslav Skoryk has become on of the Ukraine’s most prolific composers, and last March I welcomed his first four violin concertos. Now we are brought up to date with the five concertos written over the period 2004 to 2014. Born in 1938 he comes from a generation following on from Prokofiev, Kabalevsky and Shostakovich, his general style related to the days before atonality, and with an ability to reach a very wide audience. He has equally created a Skoryk sound that gives these one movement concertos an internal mood change that equate to conventional three movement scores. Certainly not aimed at those whose primary enjoyment comes from solo virtuosity, though in all five concertos the ‘finale’ requires considerable dexterity. The Fifth’s opening conversation between soloist and orchestra grasps attention, the work apparently ending in dancing gaiety until sadness overtakes it. Five years elapsed before the Sixth of 2009 where he uses his own version of folk music as a genesis, while it was more of the same in the Seventh. The major change comes in the Eighth where Skoryk uses themes from piano works by Chopin to mark the bicentenary of the Polish composer’s birth, and comes as the second of his 2011 concertos. It is his most extended and melodic concerto, dominated by a powerful Funeral March. Then, when 76 years old, his Seventh seems to be his valedictory score, full of sadness and pre-empting death, the violin singing a sorrowful song, moments of activity soon swept away. The performances come from one of the composer’s most persuasive champions, the violinist, Andrej Bielow, playing a magnificent 1745 Guadagnini instrument, and the National Symphony of the Ukraine, a very fine orchestra under their Music Director, Volodymyr Sirenko. The recording quality is very good in definition, balance and impact.” (David’s Review Corner)