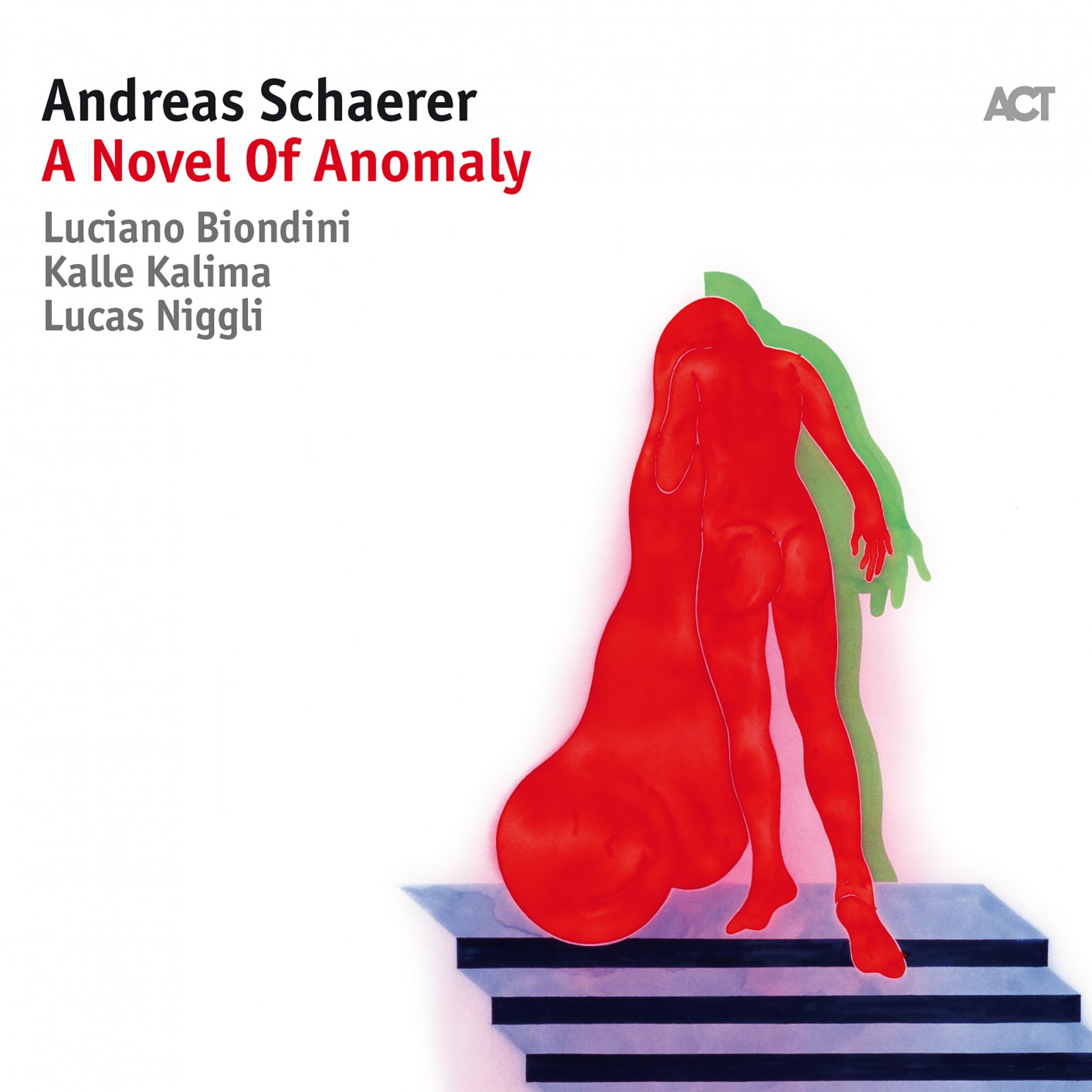 After his gargantuan orchestral work “The Big Wig” and the improvisational fireworks of “Out of Land” (with Emile Parisien, Vincent Peirani and Michael Wollny) Andreas Schaerer has now immersed himself in a new sound-world. “A Novel Of Anomaly” presents eleven short stories, offering opportunities do delve into more intimate and pared-down vocal textures.

Music involves so many levels of communication: verbal, audiovisual, emotional, even body language. In jazz, the spontaneity of improvisation ramps up the suspense and the excitement. And yet in the best situations, instant osmosis and mutual trust can inexplicably kick in. And that was what happened in 2013 with the meeting of Andreas Schaerer, the Berne-based vocal acrobat and multi-genre composer, with Zurich drummer Lucas Niggli. “We went on stage,” Schaerer remembers, “without any rehearsal beforehand, or even a discussion about what we would play – and yet it felt as if we had known each other for ages.” They then continued playing regularly as a voice-and-drums duo. Sometimes what resulted was quiet acoustic dialogues; at other times they would seek out the untrammelled, bombastic and loud. And they decided quite soon that they really wanted to do was to shed light on these two extremes.

So, for the purposes of a tour, they decided to use guests to develop their duo into two different trios: there would be a first trio with the Italian accordionist Luciano Biondini, which would concentrate on the lyrical, the poetic and what simply felt good; and a second with the Berlin-based Finnish guitarist Kalle Kalima, in which they would enjoy amplified sounds and electronics. “Rehearsals were planned so that we could work with Luciano in the morning and then with Kalle in the afternoon,” recalls Schaerer. “But a flight delay brought all four of us to the rehearsal room at the same time, and our sound-check simply morphed into a wild two-hour session of collective improvisation.” Niggli adds: “the two of them got on so well with each other, it was clear to us that we wouldn’t want to pull them apart again.” And that is how, instead of two trios, this one-of-a-kind quartet with guitar, accordion, drums and voice was born. Because all of its members are so popular, the band was highly regarded from the very start, and was invited by several festivals. In the course of these performances the group gelled, and what evolved was a quartet in which all of the co-conspirators would have an equal role. They started with old pieces which each took from his own repertoire, and then gradually expanded the scope with new numbers written especially for the quartet. All four were able to contribute compositions reflecting their respective musical origins and preferences.

Thus the new album “A Novel Of Anomaly” opens all kind of colourful vistas, and yet at the same time reveals the harmonic inclinations and instantly recognizable character of the band.

In “Aritmia”, an ideal opener with its driving swing, as in the melancholy ballad “Stagione”, the central focus is on the Mediterranean element, Biondini’s ‘Italianità’. Kalle Kalima’s “Dive” is influenced by Finnish tango, and in “Planet Zumo” the guitarist brings to the fore memories of his collaboration with Nigerian drummer Tony Allen through propulsive rhythms and the distinctive rumble of highlife guitar. Niggli also turns his gaze towards Africa. He lived in Cameroon until he was six years old. The African poet Chenjerai Hove was the creative fountainhead for his ethereal track “Flood”. In the accordion/vocal duet “Causa Danzante”, Schaerer finally makes room for some classical reminiscences, and then in “Getalateria” he lays down a brilliant rocky alpine yodel-blues. In the hymnic “Signor Giudice” all the elements – the filigree and powerful drums of Niggli, Schaerer’s multiphonics and beatboxing solos, Kalima’s expressive guitar, and the almost orchestral accordion of Biondini – find an ideal way to combine together.

“For me it was important to accommodate the mother tongue of each of the musicians in this album,” Schaerer emphasizes. Thus “Fiore Salino”, composed by the members of quartet, is a story told in Italian about spiritual affinities and friendships. In “Swie Embri” Schaerer sings in the dialect of the German part of Valais about the eternal flow of things. Finally, the Finnish text of “Laulu Jatkuu”, inspired by a mountaineering drama which occurred during the band’s performance at Mont Blanc, reflects upon the concurrence of creation and destruction.

A “Novel Of Anomaly”, then, is a dazzling testimony to the way contemporary European jazz is growing and converging. After his gargantuan orchestral work “The Big Wig” and the improvisational fireworks of “Out of Land” (with Emile Parisien, Vincent Peirani and Michael Wollny) Andreas Schaerer has now immersed himself in a new sound-world. “A Novel Of Anomaly” presents eleven short stories, offering opportunities do delve into more intimate and pared-down vocal textures. It is an unusual, surprising and compelling album.