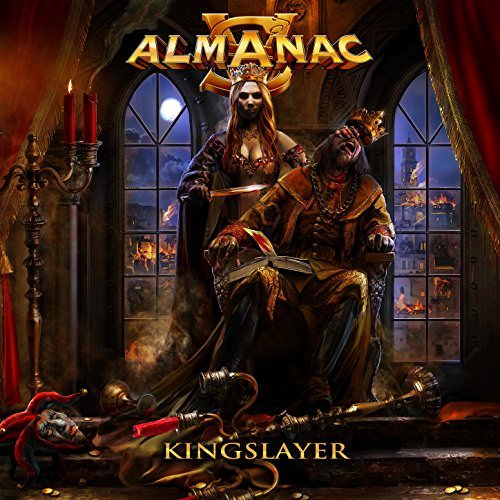 Almanac caused quite a bit of noise last year with the (not so) surprisingly good ‘Tsar’, freeing guitar master and genius composer Viktor Smolski from the shackles of his former band, Rage. Now with a mild notoriety and consolidating the vocal lineup from its first album as the bass and drum duties are renewed -, the band tries to take it up a notch with ‘Kingslayer’, second album in a span of less than two years.

The album tells stories about several Kings and rulers across history. Opener “Regicide” for instance, tells of the assassination of King Henry the VIII by a monk, while “Hail to the King” is about King Dhatusena of Sri Lanka. Having three lead singers (and experienced ones at that) in Andy B. Franck (Brainstorm, ex-Ivanhoe), David Readman (Pink Cream 69) and Jeannette Marchewka (Lingua Mortis Orchestra) helps significantly in this particular storytelling scenario, giving room for Smolski to play around with diverse vocal elements and more melodic and anthemic parts. True, Marchewka techniques are mainly used as backing vocals, but there are also parts where she takes leading roles and changes some of the conventional parts played by the duo Franck/Readman.

Expect higher doses of drama, monumental grandeur and epic atmosphere here compared to ‘Tsar’, as Smolski crank it up on the cheesiness of the songs, especially when his most virtuous and Neoclassical-like riffs and solos are displayed. The keyboard lines (also performed by Smolski) are also more prominent here, providing great support in songs like “Guilty as Charged” and “Losing My Mind”.

The latter, for that matter, alongside “Children of the Sacred Path” and “Kingdom of the Blind”, are my favorites here and reminisce the high points of Smolski’s career, taking something from almost every instrumental elements of his past bands, from Mind Odyssey to Rage. The singalong choruses and the emotional passages are all here, while the harshness of Franck’s voice keeps things powerful and high spirited.

Almanac were able to successfully mix symphony, heaviness and sophistication in one package, thanks in its majority to Smolski’s unique view of music and to his supporting cast, especially the vocalists. It would be unfair, though, not to praise newcomers Tim Rashid (bass) and Athanasios Tsoukas (drums) on their own roles here. The kitchen is executed perfectly and they are rarely pushed to the background, with Rashid even putting out some cool solo parts throughout the course of the record.