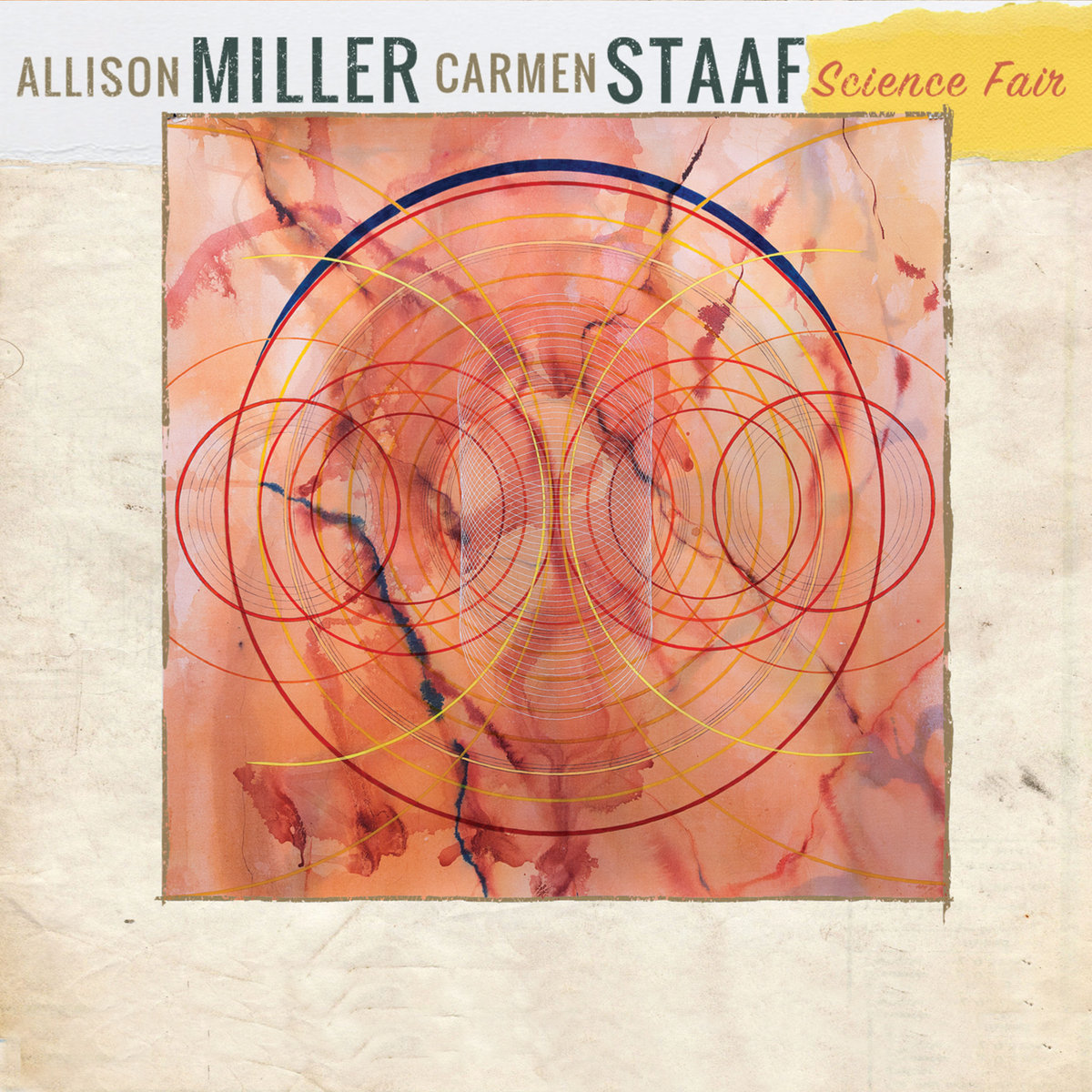 Scientists spend long hours investigating their passions, delving into the complex details of their research in pursuit of new knowledge. In a science fair, they demonstrate their findings, making them accessible and even fun. As a combustion reaction generates heat and light, a similar reaction happens between sound and movement. With the wonder of kids making a baking soda volcano, drummer Allison Miller and pianist Carmen Staaf combine bold musical concepts, tremendous collaborators, and a passion to challenge and explore into an eruption of energy on their fantastic new recording, Science Fair.

Miller is well-known in the jazz and pop worlds, having backed Natalie Merchant and Ani DiFranco, then going on to lead her own celebrated jazz ensembles, including Boom Tic Boom. Miller’s collaboration with Staaf began a few years ago. When Miller needed a piano substitute for the Reykjavik Jazz Festival in 2015, she called her friend, bassist Todd Sickafoose. He suggested Staaf, who had just finished her time at the Thelonious Monk Institute of Jazz Performance, and had recently impressed Sickafoose on a performance at the Blue Whale in Los Angeles.

The connection was made and a three-show trial by fire ensued. The connection between the two musicians was immediate. They found a kindred spirit in each other, as their musical orientations are straight ahead, rhythmically minded, and open to suggestion. The most important element was the level of trust they quickly developed, thus freeing them to tap into their creativity more fully and spur their musical dialog.

Miller and Staaf began to meet regularly. Their rehearsals led to collaborations in new ensemble configurations and with dancers. Dance and music for dance has been important for each of them. Miller grew up in a family enamored with movement and immersed herself in the Washington, DC youth dance scene. She went on to become musical director for a number of choreographers. Though not a dancer herself, Staaf has been drawn to music made for dancing, including Afro-Cuban, salsa, West African, and Indian vocal percussive music.

Miller and Staaf’s experiments began to take shape as a recording project. They both began to bring tunes to their weekly rehearsals, and tinkered with arrangements and different ensemble lineups. They eventually picked bassist Matt Penman to round out their core trio. He proved to be of a similar mindset, fun-loving and open-minded, not to mention a highly swinging accompanist. For a number of pieces, the trio is augmented by one or two horns, namely the gifted trumpeter Ambrose Akinmusire and the wonderful saxophonist Dayna Stephens.

Assembling all of the pieces for Science Fair was akin to a science experiment. Miller and Staaf even had their own “mad scientist” in producer Ben Goldberg, who helped put the final pieces together. The two leaders wanted to insure that the compositions would be diverse yet balanced; there are four compositions from each composer, though they worked together to shape the final arrangements. Similarly, the leaders wanted to have a diverse ensemble representing a cosmopolitan mix of genders and races, but, most importantly, all sharing a passion for self and group expression.

The recording begins with Miller’s attention grabbing “What?!,” originally written for choreographer Michelle Dorance’s “Speak” project, the piece features an interesting structure of 5 beat patterns and the outstanding Akinmusire. Staaf’s dark and meditative “Symmetry” is a brave mood shift and shows the ensemble’s flexibility on shifting rhythms and an elastic form. Miller’s quietly turbulent “Ready Steady” is a Joni Mitchell inspired diatonic, medium swing tune, while Staaf’s bluesy and direct “MLW” is a bouncy tribute to the great Mary Lou Williams, played as a duo. The heart of the recording is Miller’s two-part “Weightless” begins bombastically with blocked chords and ferocious drums but transforms with the addition of horns, which calm the waters.

Taking its title from a Jerry Bergonzi catch phrase, Staaf’s “Nobody’s Human” tries to emulate the great saxophonist/educator’s vibe of methodical meets spiritual in a laidback piece featuring Stephens’ s resonant tenor. Building off the chord changes of the standard “East of the Sun,” Staaf’s “West of the Moon” is pure energy and pushes the trio into the wilds of group improvisation. Staaf’s stunning solo on Miller’s “Skyway Intro” quotes the protest classic “This Land Is Your Land” (strangely enough, the song uses “skyway” in its lyrics, unbeknownst to Miller at the time of composing!) in one hand while playing the other melody in the other. The ensemble reading has a gospel influence, making the piece a torch song of utter beauty, aided by a heartbreaking Penman bass solo.

Mixed in the right amounts, the parts that Allison Miller, Carmen Staaf and Company bring to Science Fair are thoughtful, engaging, and incredibly grooving; a musical experiment that exceeds expectations and promises more musical discovery in the future.