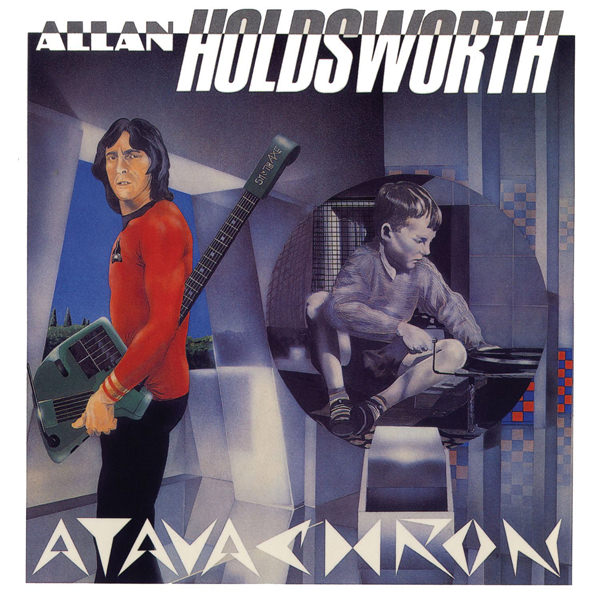 Originally released in 1986, Atavachron from influential guitarist Allan Holdsworth has been remastered for this reissue, part of a 2012 series. Influenced by an episode of Star Trek, the jazz fusion album marks the debut of Holdsworth’s use of the SynthAxe, an electronic controller he embraced on several subsequent recordings.

For a little background, back in the ’80s the SynthAxe was invented. It looked like something that fell out of a UFO. It was guitar-like with sets of strings and other onboard controls that allowed the triggering (playing) of synthesizers. What was unique was that guitarists could therefore play a synthesizer without needing a great amount of keyboard expertise. The SynthAxe was the interface that very uniquely interpreted a guitarist’s skill into synth sounds. For guitarist Allan Holdsworth, it was yet a whole new way to achieve the sounds unvoiced in his soul in ways he just couldn’t do with a standard guitar. Holdsworth has always sought a horn-like voicing with the ability to manipulate a note in a myriad of ways. He is known for being one of the most unique stylists on guitar, but it is the SynthAxe that allows him to go places a guitar can’t reach. This release was special in that it marks Holdsworth’s first use of the SynthAxe alongside electric guitar. The SynthAxe sounds more like a keyboard than a guitar. It has a wider sound spectrum than keyboards and in this release you will hear a myriad of synthscapes and effects. This release offered a semi-progressive symphonic element and served to ever stretch the boundaries of jazz fusion. Beautiful female vocals in one song framed by surrealistic visual musicks of the SynthAxe and keyboardy leads by Holdsworth may have turned guitar fans off, but this effort is clear evidence of the genius Holdsworth was demonstrating release after release. And as expected, Holdsworth continued to strive for that reed voicing and phrasing on his guitar solos, which merely pushed him to his best. –AllMusic Review by John W. Patterson