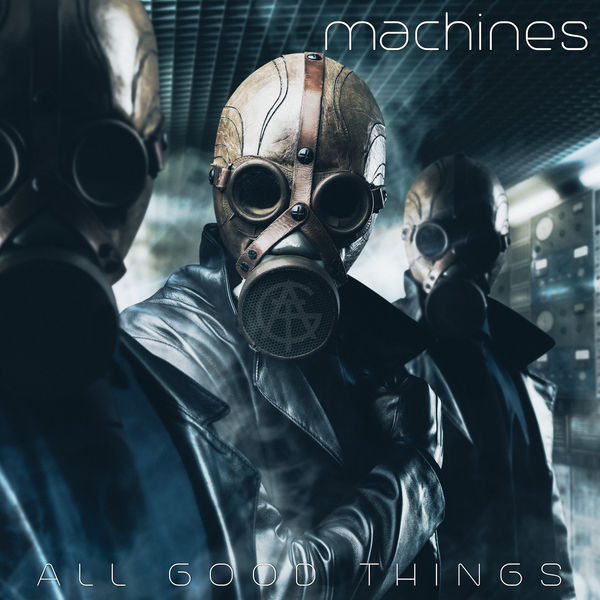 The band name says it all, this album is pretty much all good things for your soul, your heart and your eardrums. The band hails from Los Angeles, and started as a studio band recording music for games, movies and trailers under the name “Battle Rock” but soon thereafter the band ALL GOOD THINGS began!!! This past month, Oct 20th to be exact, this album, “MACHINES” came out and is the band’s 8th studio album.

The disc opens up with “MACHINES,” the first thing that surfaced was the powerful and commanding vocals; then the mystique of catchy hooks, memorable melodies and hard-hitting elements just take over the emotions of your soul. “NEVER DIE,” has a very radio rock friendly attitude, with its sexy, alluring rock attitude. The soaring chorus just shines through and makes the song a solid contender of best song on the disc. “BEGINNING OF THE END,” begins with softness and delicateness, combining endearing compassion and beautiful vocal patterns throughout the song, makes the lyrical content shine. The highs and lows of the song, the rich layering of emotion through music, just really gives this song an adventurous tone, and guides you through the feelings the band want the listener to embark on, when listening. Then we get to the song that made me go crazy with happiness, “BORN READY”; its feisty, it has attitude and sassiness. It shows another side of the band with a little punk, a little rock and a whole lot of melody driven ambition. “BREAK THROUGH THIS WALL,” brings the heavier side, with the vocal melodies and harmonies that I love. Then intertwine that with a little rap/rock element, and the song surfaces to a new level. Makes me want to see this song in a live setting. “WHAT HAVE I BECOME,”really resonated with me, on a personal level lyrically, so I was already a fan at first listen, but the 2nd time I took a listen to this song, I could see the musicianship of this band, the songwriting ability of these artists, and is just a well put together track. “FOR THE GLORY,” yet again brings you to a new level, with some artistic sound elements, still showing the many sides of the band. Did I mention I love this guy’s voice too!!! “WE SHALL OVERCOME,”is beautiful sounding, with both the raw emotion, the delicate soundscape. If you could eat a song, this song would be a 5-star course to whet your palette to. The album ends with “DECIMATOR,” it shows off a little 30 Seconds to Mars vibe to it. The song starts somber and slow and blows up with huge melodies, prominent vocals that range from deeper, sultry singing to more aggressive punchy ranges. It’s a pretty massive song to end an album with, so I guess that is why I wanted more after this song ended. In wrapping up, this band ALL GOOD THINGS; I have to say they are living in a very contained area and we need to blow this band way the fuck up, because that is how good I believe their album MACHINES is!!!