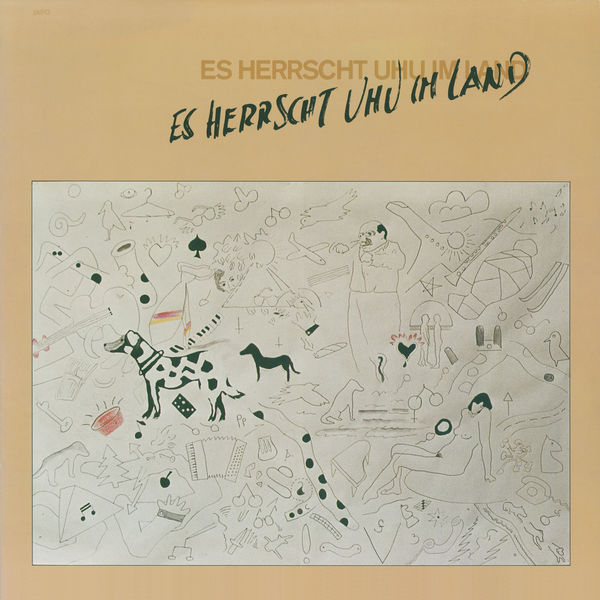 This early collaboration from saxophonist Alfred Harth and composer Heiner Goebbels is a telling lens of intersection through which to mine two fascinating careers. Harth will be familiar to ECM devotees as the progenitor of the label’s second album, Just Music, and would go on to release two further albums in other venues before meeting Goebbels in 1975. The two came together musically in a jazz-rock outfit called Rauhreif which, being to neither’s liking, dissolved, leaving these powerhouses itching for freer means of expression. It was in the context of this collaboration that Harth introduced the young Goebbels to the music of Hanns Eisler, which would of course lead to Eislermaterial, his most successful project to date. After connecting the dots for five years as a duo in various German settings, Harth called on the services of an old friend, Thomas Stöwsand, who’d played cello and flute on Just Music and was now headlong into the ECM storm. Stöwsand agreed to produce and welcomed into the studio Chris Anders, Rolf Riehm, and Annemarie Roelofs, each accomplished multi-instrumentalists, and drummer Paul Lovens. Such is the tangled web of Es herrscht Uhu in Land.

In it ideas were already taking shape that would become touchstones for Goebbels’s work, such as “Autobahn,” which meshes rallying songs with a field recording of its eponymous motorway, while “Wertkauf” betrays a less delicate side, sounding like something out of an Otomo Yoshihide free-for-all. The reversed vinyl and crunchy guitar make for a powerful contrast, each groove a cavity waiting for a tooth. “Mahlzeit” is a trembling gift, enacting a sacred touch of tongue to circuit. And one can’t help but uphold the frozen wasteland and creaking wonders of “Durch Den Wald” as a precursor to Stifters Dinge.

Riehm also makes a significant contribution with “Der Main.” Composed around poetry of Friedrich Hölderlin, it thus lays another important keystone in the ECM ethos. This skip through space is like a sonic parlor trick, a knock on the door of memory, a wishful thought. Through a deft admixture of songs, the relay of word to voice moves in an extended meditation. At nearly eight minutes, it towers over the outlying tracks, which average around two minutes each, and underscores the otherwise restless musings therein with a bold cohesion.

The musicians turn air to solid with their touch. Intimate musings, talking brass, laughter, and wires share a bed, rolling in the sheets until something musical takes shape. Each body part becomes a note that in combination with other, activates instrumental ideas. Harth, for one, writhes in soprano-gilded spirals over the song of a hungry whale in “Echter Lachs” and pops the electronic bubble in “Knecht U.” Yet for the most part, the group works as a whole, spitting watermelon seeds out of cartoon mouths in “Ich Nicht Mich Dich” alongside the jackhammer of self-questioning. It pulls us into an underworld of radio signals, waltzing to the beat of a perverse drum (“El Salvador”) and changing channels with the twist of a rein (“Uhu”), all the while feeding voices through a sluice pipe of craft. A spate of translation (“Superbirdsong”), dust for wings and air, and we are in the forlorn wakeup call of “Tilt!” smoking monosyllables until they stain the lungs with honesty.

In this bedtime story for the escaped mind, the main characters are an adroit political insight, a leak in the colonial pen that ruins a fluid takeover with exposition of intent, and a crucible of retrospection. Neither derisive nor derivative, this project takes a good long look at the sandy areas of our consciousness and pours water on them for sandcastles. The water jug drains itself. The water jug waits for no one.