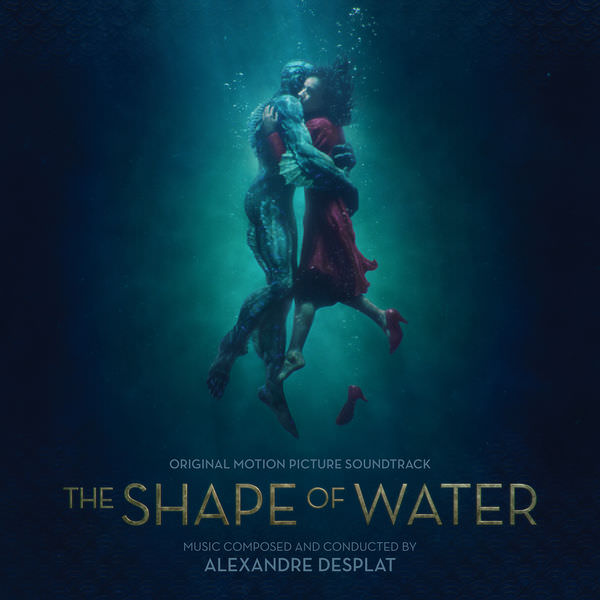 “The Shape of Water” is a 2017 American fantasy drama film directed by Guillermo del Toro and written by del Toro and Vanessa Taylor. The film stars Sally Hawkins, Michael Shannon, Richard Jenkins, Doug Jones, Michael Stuhlbarg, and Octavia Spencer. An other-worldly fairy tale, set against the backdrop of Cold War era America circa 1962. In the hidden high-security government laboratory where she works, lonely Elisa (Sally Hawkins) is trapped in a life of isolation. Elisa’s life is changed forever when she and co-worker Zelda (Octavia Spencer) discover a secret classified experiment. Alexandre Desplat wrote the score.

Now del Toro’s has a fascinating and unlimited imagination and these are not attributes I would usually mention in relation to Alexandre Desplat’s music; quite far from it so I was surprised by the choice of composers. On the other hand it doesn’t take a sparkling imagination to make for good film music so the French romantic like title theme “The shape of water” delights me with the harmonica and the instrumental hide and seek plus a superb flute motif. The latest Desplat score I heard was the very good “Suburbicon” so maybe he is on a roll here. After all the story is a fairy tale and the opening cue makes me think of just that. The theme for “The creature” keeps the momentum going with a dark tip toed symphonic sound where the instruments sound as if they are hiding and are barely touched.

“Elisa’s theme” keeps the whimsical and dreamy sound of the score, with warm and melodic flute motifs that fly like butterflies. The music is jolly, playful, warm and it makes me think of a sunny sanctuary where there are no worries or troubles. I admit I have rarely been this charmed by a Desplat composition. This score is pure honey in its first few cues, a celebration of optimism. The first three cues are so up my alley that when the classical Desplat sound returns in “Fingers” or “Spy meeting” I am not in a rush to finish listening to this score. I want to discover more gems that wake up my nostalgia for Italian or French romantic movies from the 70s and 80s as the whistling and harmonica of “Elisa and Zelda” does.

When Alexandre Desplat writes a score that sounds a lot of times like an old school Ennio Morricone composition, I am a happy camper. This is a sound I grew up with, a sound I’ve loved since I first heard music and every careless whistle or every romantic melody put me in the best of moods. “The shape of water” is the perfect combination or fairy tale and romance and I found myself dreaming during the best moments and captivated during the more serious ones. There is also a bold 11 minutes long opus “The escape” which kept me on the edge of my seat from start to finish. It’s now two Desplat scores in a row I’ve really enjoyed and this is a surprise for me. I think this is him at his most romantic, old school romantic and I think he should write like this more often.