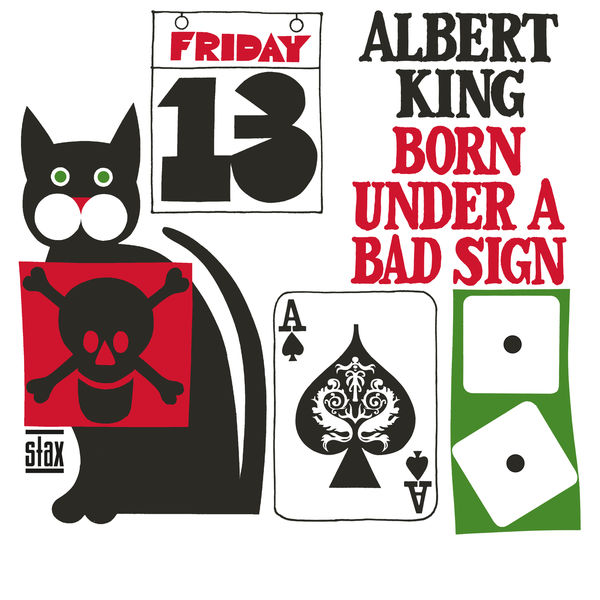 Simply one of the greatest blues choruses ever. It’s screaming: “Life don’t get much harder than this!” The funky, swinging bass line, perforated with defiant, almost haughty guitar licks, is a legendary piece of music. It’s one of those songs that people know as soon as they hear the instantly recognisable introduction – but it’s more likely to be the Cream version that they’ll have in mind. The band transformed the title track from Albert King’s Born Under A Bad Sign into a huge hit, helping the album Wheels Of Fire to the No.3 and No.1 chart positions in the UK and US, respectively, and producing the first ever Platinum-selling double-album.

Born Under A Bad Sign is Albert King’s legendary first album for Stax Records, and features Booker T. & The MGs and the Memphis Horns. The Indianola, Mississippi-born “King of the Blues Guitar,” cemented his legacy with this debut set. While he’d recorded for labels like Vee-Jay, Parrot and Bobbin, it was his chemistry with the Stax team label executives Al Bell, Jim Stewart and Estelle Axton, songwriters Booker T. Jones and William Bell, and backing from Booker T. & the MGs and the Memphis Horns that put King on the blues map. King’s first Stax recording was “Laundromat Blues,” included on this album. Booker T. Jones and Stax soul singer William Bell came up with the thundering bass riff that defined the title track “Born Under a Bad Sign.” The song notched #49 on the R&B chart in 1967. The album has been inducted into the Grammy Hall of Fame and included in Rolling Stone’s “500 Greatest Albums of All Time.” This ALL-ANALOG reissue has been mastered from the original mono tapes by Kevin Gray at Cohearent Audio and pressed on 180-gram vinyl at Memphis Record Pressing. The mono mix of this album has been unavailable on vinyl since the album’s original 1967 release.

“Albert King recorded a lot in the early ’60s, including some classic sides, but they never quite hit the mark. They never gained a large audience, nor did they really capture the ferocity of his single-string leads. Then he signed with Stax in 1966 and recorded a number of sessions with the house band, Booker T. & the MG’s, and everything just clicked. The MG’s gave King supple Southern support, providing an excellent contrast to his tightly wound lead guitar, allowing to him to unleash a torrent of blistering guitar runs that were profoundly influential, not just in blues, but in rock & roll (witness Eric Clapton’s unabashed copping of King throughout Cream’s Disraeli Gears). Initially, these sessions were just released as singles, but they were soon compiled as King’s Stax debut, Born Under a Bad Sign. Certainly, the concentration of singles gives the album a consistency these were songs devised to get attention but, years later, it’s astounding how strong this catalog of songs is: “Born Under a Bad Sign,” “Crosscut Saw,” “Oh Pretty Woman,” “The Hunter,” “Personal Manager,” and “Laundromat Blues” form the very foundation of Albert King’s musical identity and legacy. Few blues albums are this on a cut-by-cut level; the songs are exceptional and the performances are rich, from King’s dynamic playing to the Southern funk of the MG’s. It was immediately influential at the time and, over the years, it has only grown in stature as one of the very greatest electric blues albums of all time.”