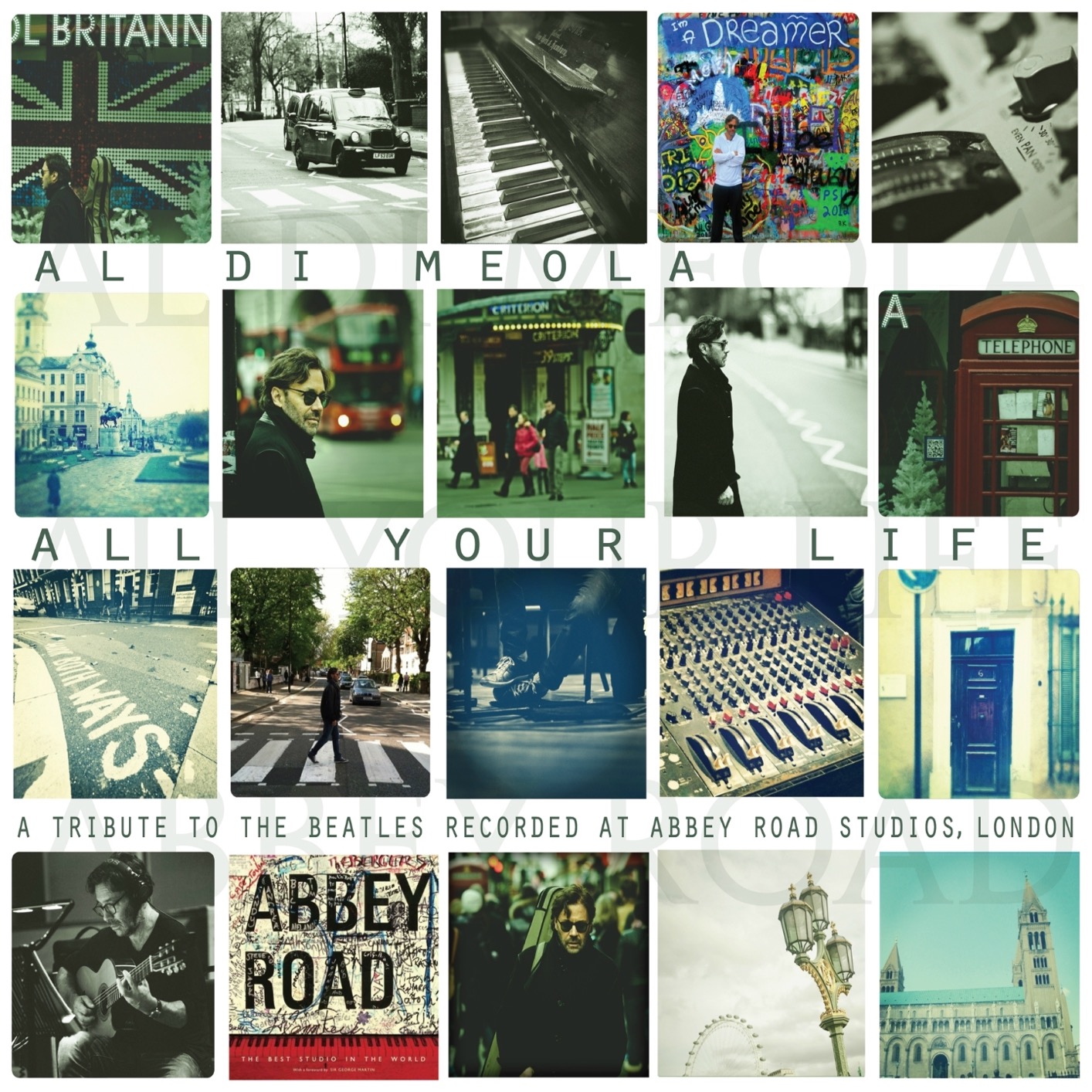 The thundering power of high energy rock fuelled fusion, the subtly woven sounds of Latin American music and in particular the music of his Argentinian friend and inspiration Astor Piazzolla, deliver the breathtaking interchange between acoustic and electric between sensitivity and daring, solo brilliance and mutual understanding within a group performance…

There really isn’t anything that guitar virtuoso Al Di Meola hasn’t explored and mastered with ease since his glorious beginnings back in the seventies. Through his dazzling technique, his superb sense of rhythm and the artistic unwillingness to compromise, virtually everything he touches turns to gold under the deftness of his fingers. The material selected by Di Meola for this current album ‘All Your Life’ is itself already pure gold, and under his determined hands it takes on a unique, new sheen: the treasure chest that is the songs of the Beatles.

‘Man, that was revolutionary! Not just the fresh sound, never before heard, but the song writing was also superb’, reflects Al in a fascinating essay for the booklet about the Fab Four phenomenon. With their ‘great voices, cool lyrics, unbelievable melodies and harmonies’ the four from Liverpool had also influenced him heavily in the early years. Time and again the brilliant guitarist had dreamt about creating a tribute to the Beatles but each time he rejected the idea: ‘You can’t improve on Sgt. Pepper.’

In early 2012 during a European tour he did however pluck up the courage. He rented out the legendary Abbey Road Studios, walked across the famous zebra crossing, and discovered a curious magic within those historic premises to finally have ‘the most fantastic studio experience of my life’. The sound was to be analogue, to reflect that of the Beatles, so simple and at the same time magical. With only his acoustic guitar and some percussion, and now and again assisted by his co-producer Hernan Romero with hand claps and rhythmical accompaniment, Al Di Meola recorded a total of 14 Beatles’ classics in three recording sessions between May 2012 and February 2013. Over this period it so happened that he met none other than Paul McCartney by chance during a stay on the American east coast.

On ‘All Your Life’ the guitarist has discovered a way to harmoniously blend his own musical world with that of his idols. In doing so he’s not only ventured to take on those often covered, simple and brilliant classics with his own instinctive feel; the Lennon/McCartney melodies such as ‘Eleanor Rigby’, ‘Blackbird’, ‘And I Love Her’, ‘Michelle’ or ‘With A Little Help From My Friends’, but he has also accepted the challenge posed by the psychedelic gems and lends ‘Day In The Life’ or ‘I Am The Walrus’ a surprising acoustic finish. Nobody can fail to be moved by the Beatles with what results. Depending on the listener’s perspective, and in the hands of Al Di Meola, their music will either reawaken a passion or be the spark which ignites a new fascination.

“After four decades as a bona-fide guitar hero, Al Di Meola has come full circle back to his roots with All Your Life, a stirring and highly personal take on the Beatles music that he grew up with.” (Jazziz)

“Recorded in analog at Abbey Road Studios in London, where the Beatles created most of their records during their heyday, All Your Life stands as a triumph in the long and illustrious career of a bona-fide guitar hero.” (Guitar Player)