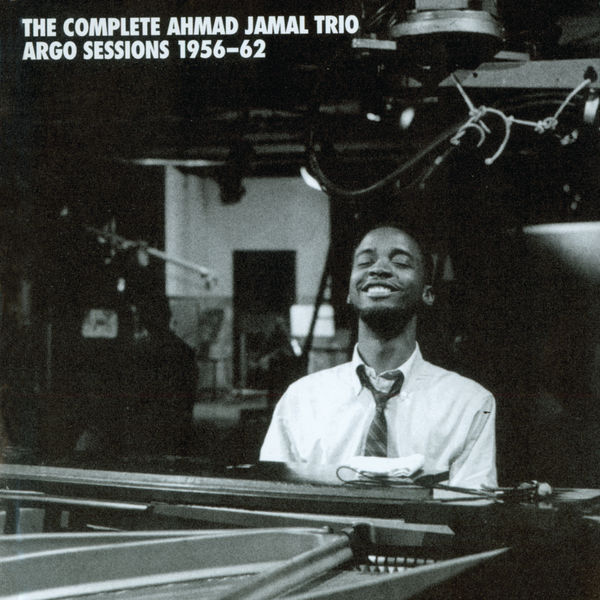 “When I listen to these records now… when I listen to the Pershing, it’s phenomenal, I must say. What they were doing, phenomenal, the lines and the purity. It’s so pure … It was sheer joy working with these two individuals. Master musicians,” writes pianist/bandleader Ahmad Jamal in the liner notes to this collection.

If there ever was a subject worthy of a Mosaic box set, Jamal is it. For six decades, he has been, for several reasons, one of the most enduring and identifiable artists in jazz, or, as he prefers to describe it, “American classic music.” First, there is his sound: a breathtaking amalgam of Erroll Garner’s pithy touch, Nat “King” Cole’s intricate horn-like, pre-bop lines, and Art Tatum’s Mephistophelean technique. Second, Jamal conveys his signature sound through his inventive, crystalline re-arrangements of show tunes, consisting of his intelligent, ingenious interludes, orchestral chord voicings and asymmetrical tempo changes (communicated on stage with mysterious hand signals). Those attributes contributed to the third reason for Jamal’s immortality: his 1958 version of the obscure Broadway tune “Poinciana,” which remained a bestseller on the pop charts for an astonishing 108 weeks, insuring his place at the summit of the jazz pantheon. And then there’s his influence, obviously on generations of pianists—from Ramsey Lewis and Herbie Hancock to Eric Reed and Jacky Terrasson and on non-keyboardists, most famously trumpeter Miles Davis, who used Jamal’s concept of space and recorded many Jamal-associated songs, such as “A Gal in Calico,” “But Not for Me” and “New Rhumba.”

All of those aforementioned attributes are highlighted in this terrific and long overdue nine-CD box set, culled from 13 albums, brilliantly produced by Michael Cuscuna, with ebullient liner notes from drummer Kenny Washington – Vocals who played with Jamal that chronicle Jamal’s trademarked trio with bassist Israel Crosby and drummer Vernell Fournier, mostly on live club dates and some studio records, with unreleased tracks and alternate takes. To set the stage, it’s important to know how Jamal arrived in Chicago; the scene of his greatest musical triumphs.

Born in 1930 in Pittsburgh, Jamal was a child prodigy that Art Tatum prophesized would be a “coming great.” By the time he was 11 years old, he was already a professional musician, and he received an exceptional musical education that included the classics: European and African-American, from composer Franz Liszt, Tatum and trumpeter Dizzy Gillespie to the blues. Discovered by bandleader George Hudson during his senior year in Westinghouse High, he traveled with Hudson to Atlantic City and the Midwest, played with an R&B group The Caldwells and ended up in Chicago. He formed the Four Strings, a drumless quartet consisting of piano, bass, violin and guitar. He later switched from a foursome to a trio sans violin, and recorded for the Parrot and Epic labels before signing with the Argo label in 1955, when he released his last drumless trio recording, Chamber Music of the New Jazz, with guitarist Ray Crawford and Israel Crosby. Another Chicago treasure, Crosby previously played with clarinetist Benny Goodman, and is one of the music’s most criminally underrated musicians, whose impeccable intonation and sure-footed, rock-steady basslines were indispensable to the Jamal sound.

Jamal eventually added the trap drums in place of the guitar. The first eight tracks on the first CD are from Jamal’s first drum-trio studio Argo album, Count ‘Em 88, with Walter Perkins, a capable local drummer. Perkins transferred the conga rhythms that the guitarist in the Four Strings played to the drums, as evidenced by the bouncy take on the Russian folksong “Volga Boatman,” and a pedal point-pulsed “Green Dolphin Street,” along with two early original compositions, the 4/4 numbers “Beat Out One,” “Aki and Ukthay (Brother and Sister)” and “Jim Love Sue,” along with the wistful, ivory tickled ballad dedicated to his first wife, “Maryam.”

Everything that we have come to associate with Jamal what Washington writes in the liner notes as “Jamalisms” is heard here: his near impossible arpeggios, tricky, unexpected bursts of piano prowess, his penchant for dancing, Latin-style, brush-stroked beats, grooving, ostinato basslines, and lush dynamics. But with all of those “Jamalisms” in place, it was addition of the New Orleans Creole Vernell Fournier, who replaced Perkins, that rocketed the Jamal trio into the orbit of stardom. Fournier’s unique ability to bridge Crescent City cadences with Afro-Latin rhythms set the standard for all drummers who came after him in the Jamal triad, including his Big Easy homeboys Idris Muhammad and Herlin Riley, which explains the dynamic difference on the music on the next disc.

Disc two contains the treasure of the entire box set. Recorded in a Black South Side lounge called the Pershing, in 1958, the immortal sides from this historic date came to be known as the album But Not for Me: Ahmad Jamal Live at the Pershing. Simply put, this is arguably the greatest live jazz recording ever made. The superb, digital remastering puts you right next Jamal’s percolating keyboard, where you can hear and almost feel him tickling those ivories, and the finger-snapping, vocal African-American clientele adds to the recorded magic. Jamal, Crosby, and Fournier are in superb form; in perfect, swinging simpatico. The mid-tempo title track grooves with the same kind of cool intensity of a Modern Jazz Quartet treatment, with what Washington describes as a “businessman’s bounce tempo,” contrasted by the swing-at-the speed-of-sound take on “Surrey with the Fringe on Top” and the shuffle-boiled shout out to Dizzy Gillespie’s “Woody ‘N” You.” And there’s the brisk “Billy Boy,” a block chord ditty that Jamal previously recorded for Epic that Miles Davis liked so much that he recorded it on his album Milestones (Columbia, 1955), and made his pianist Red Garland play the Jamal version note for note.

But of course, its Jamal’s complete reimaging of the show tune “Poinciana” that steals the show. Jamal proves on this selection why he deserves to also be listed as one of jazz’s greatest arrangers. Buoyed by Fournier’s funky and finessed, Afro-Carib/second line pulsations, and Crosby’s “hipnotic” lines, he explores, extends and exploits the composition’s rhythmic, melodic and harmonic possibilities in cool, compelling and calculated chorus after chorus, much in the same way Duke Ellington did on his equally stupendous, masterpiece live cut, “Diminuendo and Crescendo in Blue,” recorded a couple of years earlier. What comes through on this session, and on the second volume recorded at the Pershing in June of that same year, is the palpable sense that everybody on the gig knew something magical was going down on wax and into eternity.

If Jamal’s career had stopped at that recording, his place in jazz would have been assured. But as the rest of the tracks on this box set show, Jamal and company built on the success of But Not for Me with sustained artistry and creativity. Disc three features tracks recorded at Washington, D.C.’s Spotlite Club, another African-American venue. By now, Jamal and his triad are stars, and they do not disappoint. Dig the 4/4, soulful “Ahmad Blues” (contrast this track with the big-band version from a 1959 TV clip from the Robert Herridge Theater, currently running on YouTube), along with “Seleritus,” a plaintive, walking ballad dedicated to a young boy Jamal knew that was released as a single; a rousing rendition of the swing-era classic ‘Stompin’ at the Savoy” (with a Jamalian quote of the “1812 Overture”) and the festive, Margarita Lecouna-penned Cuban ditty “Taboo,” featuring Crosby simultaneously playing pizzicato bass with his right index finger, with the maraca between his pinky and fourth finger on the same hand. This type of bass/percussion playing was done in a number of Latin bands.

Disc four’s selections range from 1959 to 1961, and it includes more tracks from the Spotlite gig, including the Caribbean-cadenced “The Night Has a Thousand Eyes,” which later become associated with saxophonist John Coltrane, and the bop-era chestnut “Our Delight,” based on Tadd Dameron’s 1946 arrangement for Dizzy Gillespie’s big band, and Jamal’s second studio session, Happy Moods, which featured a number of tracks in the key of C, of all things. Jamal’s inventive take at the classical composer Morton Gould’s “Pavanne,” a movement taken from his larger work, American Symphonette, No. 2, is the album’s most interesting track. It’s a bouncy, upbeat number, and the fun begins on the bridge, where the riff-like melody sounds very similar to Coltrane’s “Impressions,” and Miles Davis’ “So What,” (an earlier version of “Pavanne was recorded by Jamal’s drumless trio in the 1950). The other standout tracks include a joyfully noised take on Billy Strayhorn’s “Raincheck,” where Jamal drops in Ellington’s “I’m Beginning to See the Light” for good measure, and the slow and sensual “Excerpt from the Blues,” which is not a blues per se (Jamal played the blues so much in Pittsburgh he avoided recording them), but still retains a bluesy tonality.

Discs six and seven contains tracks from Ahmad Jamal’s Alhambra, another live Chicago date, recorded at Jamal’s elegant, elaborate and short-lived restaurant/nightclub in 1961. With better recording fidelity, the inventions and dimensions of Jamal’s triad dance and trance with greater clarity, especially on the Crescent City-cadenced “Love For Sale,” fueled by Fournier’s Negroidally-nuanced, Louisiana drumming, the after-hours embered “Willow Weep for Me,” an anthemic rendition of “Broadway” and a svelte, spare version of “Poinciana.” Three previously unreleased studio selections that Jamal refused to release have finally seen the light of day. The medium-tempo swinger “Chi-Town” (AKA “Gem”) was written by bassist Bill Lee (Spike’s father), who was living in Chicago at the time, who also arranged “I’m Old Fashioned,” which features an introduction that shows up on his son’s film School Daze and a Island version of “We Kiss In a Shadow,” with some “Poinciana” quotes thrown in for good measure.

On the last two discs you can hear where Jamal left his trio heart in San Francisco’s famous Blackhawk club, in 1962; his last live date with Fournier and Crosby. And what a way to go out: By this time, the trio’s rapport is as good as telepathic, as evidenced by the haunting version of Claude Thornhill’s pre-Birth of the Cool classic “Snowfall,” and a funkier version of “Poinciana,” that ironically would not have seen recorded because the engineer forgot to turn off the tape recorder when Jamal played old material at live gigs (a technique then often used for saving tape). That year, Crosby and Fournier would leave Jamal to play with pianist George Shearing (though Fournier would occasionally play with Jamal in subsequent years). Crosby would die unexpectedly that same year and Jamal would move to New York, where he would go on with more acclaimed recordings like The Awakening (Impulse!, 1970), Outertimeinnerspace (Impulse!, 1972), Digital Works (Atlantic, 1985), Crystal (Atlantic, 1987) and A Quiet Time (Dreyfus Jazz, 2010).

In perfect complement to the music, kudos must also be given for the extremely rare photos, mostly from Jamal’s private collection, that show him as a precocious little lad who seemed to know that he would take the world by storm. Kenny Washington’s extensive interview with Jamal offers the most comprehensive and detailed biographical information on the pianist ever assembled for a record release. Jamal talks in detail to Washington about how the industrial inner city of Pittsburgh which gave musical birth to a whole host of stars from Billy Strayhorn, drummers Art Blakey and Kenny Clarke and saxophonist Stanley Turrentine, to guitarist George Benson and pianist Mary Lou Williams and about the incredible music education he received from teachers like Mary Cardwell Dawson, who created the first African-American company, and pianist/organist James Miller, who studied at Duquesne University.

This project years in the making, as producer Michael Cuscuna reckons in the liner notes was a labor love that lays out in linear detail the early ascent of the magnificent arc of the eternal artistry of Ahmad Jamal, now into his astonishing eighth decade. And this set should once and for all reveal what many musicians have known for years: that Vernel Fournier and Israel Crosby are two of the finest drummers and bassists of all time.