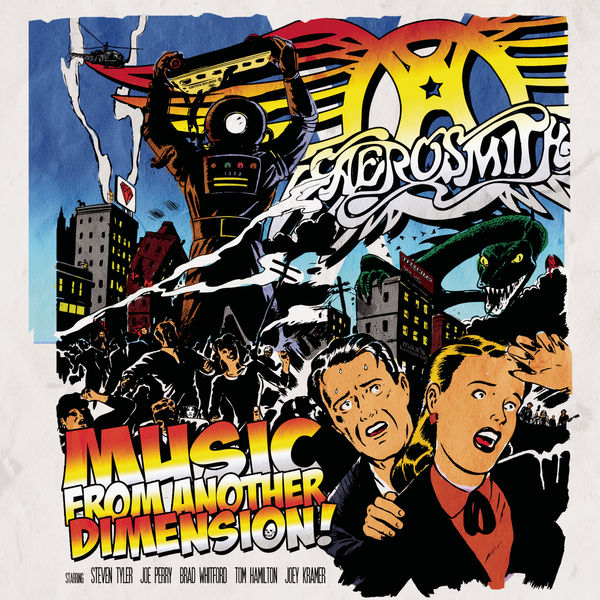 “How can we miss you when you won’t go away?” It’s a question that sounds as if it could be the title of an Aerosmith power ballad co-written by Diane Warren, but it’s a sentiment that also applies to the Boston quintet themselves. 2012’s Music from Another Dimension! may be their first album in eight years and their first record of original material in over a decade! but the band has never been far from the headlines during those missing years, and not just because Steven Tyler screeched his way into America’s homes as Simon Cowell’s replacement on American Idol. Joe Perry, the Keith Richards to Tyler’s Mick Jagger, never was happy about Tyler’s leap to the small screen but it was just one of many interpersonal squabbles that bled their way into the public. That schism can be heard on Music from Another Dimension!, particularly toward its conclusion when Perry muscles his way to the mike for a pair of bracing rockers reminiscent of the band at full flight, but more than anything, this big-budget blockbuster telegraphs that Aerosmith is indeed broadcasting from another dimension, a dimension where splashy kitchen-sink albums from rock bands could sell millions of copies on sheer momentum alone. Carrie Underwood may pop up for a duet on “Can’t Stop Loving You,” but that’s the only nod to the present on an album that’s living every day like it’s 1997. Both the rockers and ballads are big, big, big, dressed in countless overdubs, so much clatter that it can be hard to hear hooks initially. This bright blare conveniently camouflages the raggedness of Tyler’s voice as well, but Aerosmith truly show their age by the very nature of the album itself. Simply put, nobody makes albums like this any more. Nobody breaks the bank attempting to make a rock album that’s everything to everyone, and Aerosmith sound entirely oblivious to this state of affairs, carrying on like it was 1997. And, in a sense, as an overall piece of product, Music from Another Dimension! is no worse than Nine Lives. It may lack a single as immediate as “Fallin’ in Love (Is Hard on the Knees)” or the subsequent “Jaded” from 2001’s Just Push Play but it faithfully follows Aerosmith’s ’90s blueprint, getting nothing wrong but never quite feeling right.